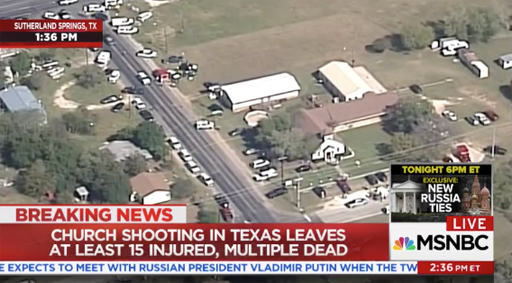 At least 25 people have been killed by a lone gunman in a small Texas church in Sutherland Springs.

“Approximately 25 people” were deceased, including the shooter, following the shooting at First Baptist Church in Sutherland Springs, Wilson County Sheriff Joe Tackett said Sunday afternoon. There was no information regarding the motivation behind the shooting, he added.

But the shooter was now “deceased,” Gamez said, adding that it was not clear if the gunman shot himself or was taken down by authorities.

Reports out of Texas are devastating. The people of Sutherland Springs need our prayers right now.

Enough with the “thoughts and prayers already.” The Bible teaches us that faith without works is dead. Do something or say nothing. https://t.co/ekYTtpQhDk

They, and their children, were literally praying at the time. What they need is political leadership. https://t.co/MhrFhxuOu4

If only you had the power to pass something so Americans no longer get butchered at concerts or in church. https://t.co/kMQ9nU8sIN