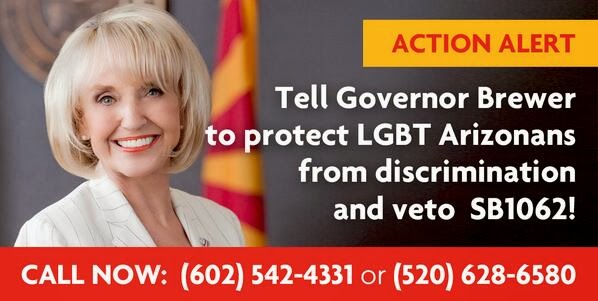 Jan Brewer, the governor of Arizona, had five days to either sign SB1062 into law (making LGBT discrimination legal), veto the bill or ignore it which would allow the legislation to become law.

The bill represents what is basically a “license to discriminate” against gays and lesbians in Arizona.

This is bad for the LGBT community. It is bad for Arizona. It’s bad for humanity.

Giving citizens the ability to hide behind “sincerely held beliefs” will affect more than the LGBT community.

Should an unwed mother-to-be see a doctor whose religion that preaches abstinence until marriage, that woman could be refused medical treatment legally.  Many other scenarios come into play in this ill-conceived piece of legislation.

You can call the governor’s office and let her know what you think.