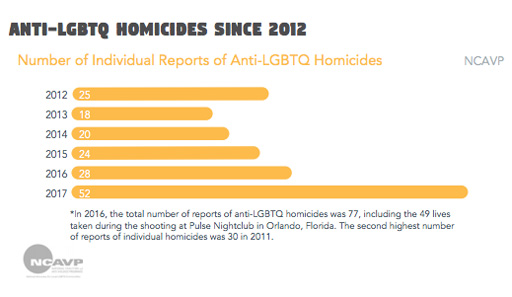 There’s always been violence directed toward the LGBT community, but life under the Donald Trump administration shows an incredible spike in anti-LGBT homicides.

According to the National Coalition of Anti-Violence Project, 2017 saw a record-breaking 52 anti-LGBT homicides making it the worst year on record regarding the murder of LGBT people.

The report, published Monday, comes after a mid-year report in August signaling 2017 was the worst year ever for anti-LGBT homicides. The new report, however, indicates anti-LGBT violence increased even further after that report and reached 52 deaths by the end of the year.

According to the National Coalition of Anti-Violence Project, that’s the highest number ever recorded in its 20-year history and represents an 86 percent increase from 2016.

Beverly Tillery, executive director of the Anti-Violence Project, said in a statement the report is “a wake-up call for all of us” and blamed the anti-LGBT policies of the Trump administration for the increased violence.

“Our communities live in an increasingly hostile and dangerous climate, after a year of anti-LGBTQ rhetoric and policies coming from the White House, federal government agencies, state and local sources and in our communities across the country,” Tillery said. “Anti-LGBTQ violence has long been a crisis, but NCAVP has watched the escalation of violence this past year with great concern.”

The victims of these violent crimes are in large part transgender women, particularly trans women of color (22 out of 52).

Seventy-one percent of those attacked were LGBT people of color.

The state of Texas led the way with 7 LGBT homicides.