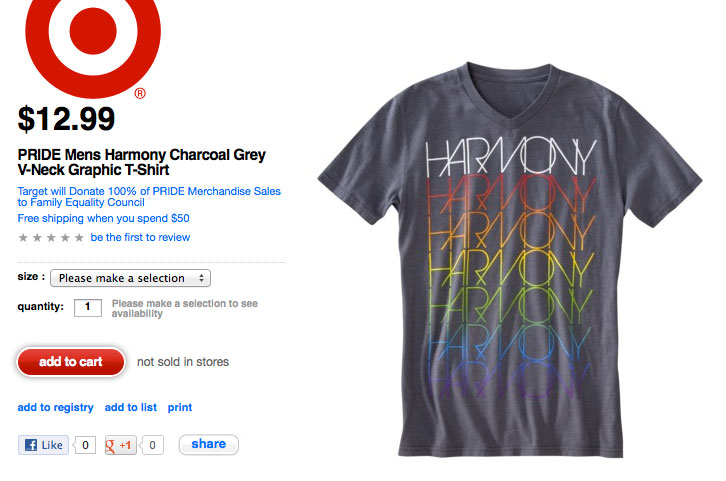 “Target’s slogan is “expect more.” And when it comes to their politics, Americans do… One of America’s biggest companies isn’t just named Target–it’s becoming one. Starting May 20, the mega-chain’s introducing a new line of same-sex “marriage” merchandise that says, “Love is love.” Target promises to donate 100% of the profits to a national homosexual group – but they don’t specify which one.

Retail analyst Britt Beemer says that Target’s strategy isn’t “very smart,” especially in conservative states, where it does the biggest business. “Anytime a retailer gets away from doing what they should be doing by being involved in a social cause, [they] lose.” The company said it wanted to “resonate beyond fashion.” But if they’re looking to resonate with Americans, they ought to try defending marriage. According to voters, the country’s still very opposed to redefining it. Let Target know that its agenda isn’t your style. Log on to target.com, scroll down, and click “Contact Us.”

Not sure if Perkins is being disingenuous or just illiterate —Target has clearly stated proceeds from the shirts will benefit the Family Equality Council, which supports LGBT families (a favorite target of FRC).

Also, the shirts — which are only available online—don’t say anything about gay marriage or even LGBT rights: The innocuous slogans, like “Love is Love,” “Harmony” and ‘Pride,” could mean almost anything. Which I’m certain that’s how Target planned it.

If you feel so inclined – check out the t-shirts on Target’s website by clicking here.