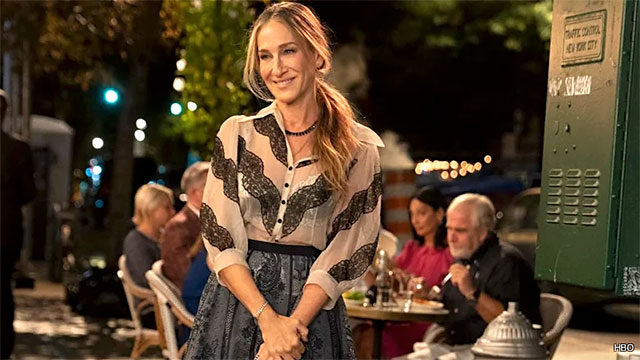 The tenth and final episode of the freshman season of And Just Like That lands this Thursday, February 3.

That same day, HBO Max will premiere a behind-the-scenes look at the making of the Sex and the City spin-off appropriately titled, And Just Like That…The Documentary.

You can expect to see chats with not only the actors in the series (including Sarah Jessica Parker, Cynthia Nixon, Kristin Davis, Mario Cantone, Sari Ramirez and Evan Handler), but producer/director Michael Patrick King, costume designer Molly Rogers, and more.

While Kim Cattrall did not return as the ever-fabulous ‘Samantha Jones’ (due in part to a “feud with cast members”), new folks have joined the party including Ramirez as queer non-binary comic and podcast host Che Diaz.

Diaz has been a chance for the writers to not only explore the non-binary universe, but also how they influence other characters like Cynthia Nixon’s Miranda.

“Getting to know our new cast members has been just a gift, and we all have something new brought to us by them,” shares Davis in the trailer for the documentary.

In addition to the new casting, the doc film will also explore aspects of the costume design for the series.

No word on if the special will offer any insight into how accusations of sexual misconduct by Chris Noth years ago rocked the show. Following the allegations, show runners reportedly excised his character, Mr. Big, from scenes later in the season.

Or, if the peek behind the scenes will include any indication of a second season of AJLT.

The reboot has gotten a wide range of reactions from fans. In the YouTube comment section for the trailer, some say they love having the three characters back with new stories. But others weren’t quite as favorable.

One commenter wrote about the documentary, “This is like watching the Captain of the Titanic high-fiving his crew after hitting the iceberg.”

Another: “Behold – a documentary on how Kim Cattrall knows best.”

What do you think, readers? Is And Just Like That… the spin-off you were hoping for?

The And Just Like That… finale and making-of documentary will air on HBO Max February 3.