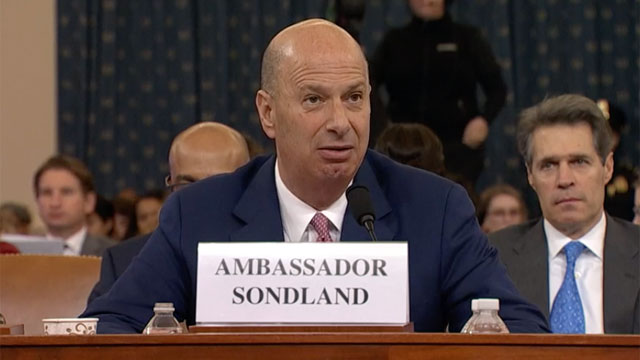 Gordon D. Sondland, the ambassador to the European Union, testified today before Congress that he worked with Rudy Giuliani to pressure Ukraine ‘at the express direction of the president’ to announce an investigation into former Vice President Joe Biden and his son, Hunter.

“I know that members of this committee have frequently framed these complicated issues in the form of a simple question: Was there a ‘quid pro quo?’” Sondland said under oath. “With regard to the requested White House call and White House meeting, the answer is yes.”

Mr. Sondland acknowledged that he told a senior Ukrainian official that to get Mr. Trump to release the frozen American security aid, the Kyiv government would likely have to publicly commit to investigating a debunked conspiracy theory involving Democrats in the 2016 election as well as Mr. Biden and his son’s ties to Burisma, a Ukrainian energy company.

But the ambassador did not attribute that linkage to any explicit direction by Mr. Trump, instead saying he came to that conclusion on his own based on the fact that the money had been held up for so long.

“In the absence of any credible explanation for the suspension of the aid,” Mr. Sondland said, “I later came to believe that the resumption of security aid would not occur until there was a public statement from Ukraine committing to the investigations of the 2016 election and Burisma, as Mr. Giuliani had demanded.”

In true Trumpian form, Trump began to distance himself from Sondland upon hearing the ambassador’s testimony.

Last month, Trump referred to Sondland, who donated $1 million to the president’s inaugural fund $1, as “a really good man and great American.”

However, this morning the tune changed: “I don’t know him very well. I have not spoken to him much. This is not a man I know well. He seems like a nice guy though.”

SCHIFF: You testified that that meeting was conditioned was a quid pro quo for the 2 investigations the president wanted. Is that right?

SCHIFF: And that everybody knew it.

TRUMP on Gordon Sondland, who he described as "a really good man and great American" last month and who gave $1 million to his inaugural: "I don't know him well. He was with other candidates … not me. Came in late." pic.twitter.com/oy9TUbwPpf

Sondland is destroying virtually every Trump defense: Trump didn’t care about Ukraine; there was a quid pro quo; Trump & Rudy demanded the announcement of investigations; everyone was in the loop; Ukraine knew about the linkage; all was directed by Trump