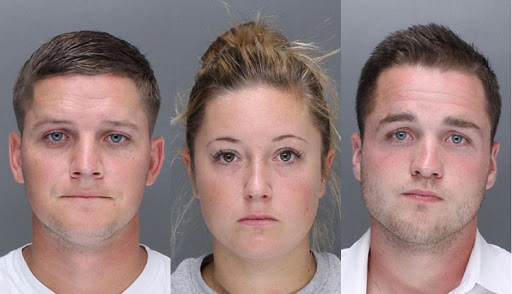 Ten months after allegedly leading the attack on a gay couple that hospitalized both victims and left one with a shattered jaw and cheekbones, the suspects in the Philly hate crime (Kevin Harrigan, Kathryn Knott and Philip Williams) have plea deals in hand.

Sources on both sides of the case confirm that all three suspects now have plea offers in hand and that they are are weighing their options.

“On behalf of my client, we are reviewing a plea offer from the District Attorney,” says Williams’ attorney Fortunato Perri. Williams stands accused of punching both victims, Zachary Hesse and Andrew Haught, according to court documents. Haught suffered the greatest injuries, requiring hospitalization.

Louis Busico, attorney for Kathryn Knott, says that he’s “always happy to have open lines of communication” with prosecutors but wouldn’t say whether Knott is going to take the deal. While Williams and Harrigan were allegedly the more physical aggressors, it was Knott who received the brunt of public backlash after homophobic rants were found on her Twitter feed.

Harrigan’s attorney, Josh Scarpello, did not return calls seeking comment. According to an affidavit of probable cause in the case, Harrigan initiated the confrontation when he called the victims “faggots,” and he struck Hesse.

Cameron Kline, spokesperson for the Philadelphia District Attorney’s Office, says that the office does not comment on plea offers but tells us that if convicted on all charges, the maximum sentence could be as high as 34 to 68 years in prison, though no one expects that the judge would hand out anywhere near the maximum sentence, especially considering that these are first offenses.

None of the attorneys nor the D.A.’s office would comment on the specifics of the plea offer, so we asked prominent Philadelphia criminal defense attorney Chuck Peruto to walk us through the thought process.

“If they can tell who did what exactly, a good deal for the guy that did the most damage is two to four years state time,” says Peruto. “And the ones that did minimal damage, maybe 11-1/2 to 23 months in county. If my clients got an offer like that, they’d probably take it. This is Philadelphia and you don’t want a gay-bashing case as a criminal defense attorney. There are a lot of gay people here, and you can’t tell who is gay on your jury.”

Each suspect has been charged with conspiracy and two counts each of aggravated assault, simple assault and recklessly endangering another person. They remain free on bail.

Last Thursday, the case was continued so that the defendants could consider the plea offers. If no plea deal is made, Busico says he expects jury selection to begin in September or October.