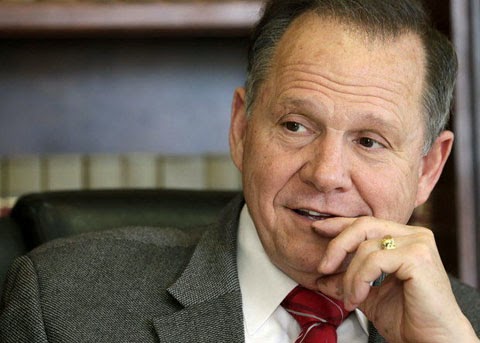 Citing his power as Administrative Head of the Alabama Judicial System, chief Justice Roy Moore (of the Alabama Supreme Court) issued his own “order” to probate judges late Sunday night purporting to bar any issuance of marriage licenses to any same-sex couples.

A recent ruling by U.S. Federal District Judge Granade (a Bush appointee) found the state’s law against same-sex marriage “unconstitutional because they violate the Due Process Clause and the Equal Protection Clause of the Fourteenth Amendment.” Although the ruling was stayed, that stay expires tomorrow, February 9th.

The state Attorney General requested an extended stay on the ruling from Judge Granade, who denied the request. AG Luther Strange then went to the 11th Circuit Court of Appeals with the same request, and received the same denial. The state then went to SCOTUS, who has remained silent on the request. With no action by SCOTUS, the ruling becomes effective tomorrow.

Judge Roy Moore has spent the past few weeks publicly fuming about the ruling, and has tried to delay or deny the legality of Judge Granade’s ruling.

Tonight, he threw his “Hail Mary.”

Moore wrote on Sunday night: “Effective immediately, no Probate Judge of the State of Alabama nor any agent or employee of any Alabama Probate Judge shall issue or recognize a marriage license that is inconsistent with Article 1, Section 36.03, of the Alabama Constitution or § 30-1-19, Ala. Code 1975.”

Legal analysts were skeptical of Moore’s authority to issue such an “order.”

Susan Watson, executive director of the American Civil Liberties Union, told The Associated Press she doubted probate judges would defy a federal judge on Moore’s behalf. She accused the chief justice of grandstanding.

“I am not aware of anything that gives him the authority to tell probate judges what to do … If he had that authority he would have claimed it much earlier than now,” Marshall said.

“This is a pathetic, last-ditch attempt at judicial fiat by an Alabama Supreme Court justice–a man who should respect the rule of law rather than advance his personal beliefs,” said Human Rights Campaign Legal Director Sarah Warbelow.

“Absent further action by the U.S. Supreme Court, the federal ruling striking down Alabama’s marriage ban ought to be fully enforced, and couples that have been waiting decades to access equal marriage under the law should not have to wait a single day longer. All probate judges should issue licenses tomorrow morning, and Chief Justice Roy Moore ought to be sanctioned.”

“The Court of Appeals and, so far, the Supreme Court of the United States has seen fit not to continue the stay. But, instead of respecting these rulings, the Chief Justice has decided to create a crisis in our state but telling the probate judges to ignore the ruling of the district court and threatening them with unspecified gubernatorial action. It’s outrageous. We urge the probate judges to follow the Constitution of the United States and issue marriage licenses when their offices open in the morning.”

Other legal experts agree that the chief justice of the state Supreme Court does not have the authority under state law to issue such orders to probate court judges.

It should be noted that Judge Moore has been removed from office before. Over a decade ago, he installed a monument of the ten commandments in the state court house which was in violation of the separation of church and state. The issue resulted in his removal from office completely. He regained his seat in 2012.

And should you wonder if the state of Alabama can ignore federal law, I point you to the Civil War. And the Civil Rights Movement.