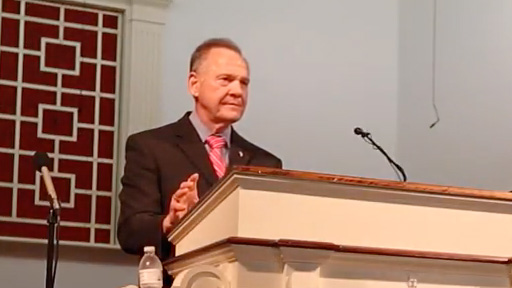 Moore, who has been plagued by sexual misconduct allegations since the Washington Post reported that he allegedly sexually assaulted a 14-year-old girl while he was 32 in the 1970s, echoed a familiar refrain of blaming “liberals” for the allegations. But Wednesday he also openly blamed gay people and socialists in his aggressive attack.

“They’re liberals. They don’t hold conservative values,” Moore said of the people he says are trying to ruin his campaign with allegations. “They are the lesbian, gay, bisexual, who want to change our culture. They are socialists who want to change our way of life and put man above God and the government is our God.”

The comments garnered applause from the congregation of the southwestern Alabama church near Mobile.

Comedian Tony Barbieri, known for his skewering of Donald Trump rallies during the 2016 presidential run, also made an appearance.