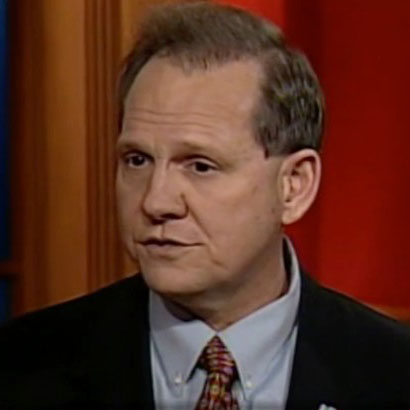 It looks like Alabama Senate Republican candidate Roy Moore is very afraid to stand in front of his possible future-constituents and answer questions about his policy positions.

WHNT News in Alabama offered to host/moderate a debate between Moore and his Democratic opponent, Doug Jones, but Moore’s campaign came back with a flat “no.”

WHNT News 19 in conjunction with our partners at Reckon by AL.com invited both of Alabama’s US Senate candidates to participate in what would have been a live, commercial-free debate. The Doug Jones campaign accepted, but the Roy Moore campaign has declined.

We at WHNT News 19 believe that public debates give voters a chance to carefully consider who represents them. A seat in the US Senate comes with immense power. It should also come with immense accountability.

Every politician, no matter their stances, party or position, should be open to conversations and challenges, even from those who might disagree.

We hope, even in a fiercely divided political climate, that candidates will remain willing to engage with the issues and each other.

As such, we went to great lengths to make our offer to both campaigns appealing.

We did not specify a format, allowing room to work with both campaigns on a mutually agreeable style. We intended to integrate questions from audience members and people following along digitally.

However, it was not enough to convince Roy Moore to meet Doug Jones in a public forum.

The Jone campaign issued this statement:

Roy Moore has been hiding from the voters, from the media and from his record for weeks and now refuses to take the same stage with Doug in a debate. Doug has said repeatedly he was willing to debate Roy Moore anytime, anywhere, about Moore’s lack of support for Medicaid, Medicare, and the Children’s Health Insurance Program and about the more than $1 million Moore took from his foundation.

No wonder he doesn’t want to debate. https://t.co/OmX0UH0QEB