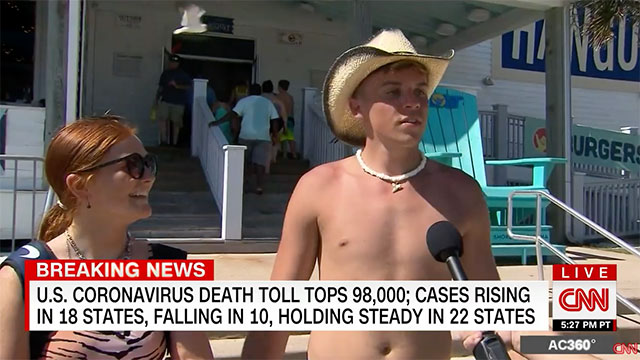 Alabama had the biggest weekly increase at 28%, Missouri’s new cases rose 27% and North Carolina’s rose 26%, according to the analysis of data from The COVID Tracking Project.

As folks in Alabama celebrated the Memorial Day weekend by hitting the beaches in droves with little-to-no social distancing or face masks.

Even with the state’s relaxed guidelines, groups are supposed to be six feet away from each other. Groups are also supposed to consist of only people who live in the same household.

CNN’s Gary Tuchman spoke to several beach-goers about any concerns they may or may not have about the coronavirus.

The responses were eye-opening.

“I’m just here just to have fun and meet everybody and be cool, you know,” said the first young man. “When it’s my time to go, it’s just my time to go.”

“Everybody’s gotta go somehow. I don’t wanna die, but I mean, if that’s what God has in store for my life then that’s okay,” said a 21-year-old woman.

Said another 20-something: “My family has the same mindset as me. We kind of just agreed that if we get it we get it. We’re gonna handle it as a family and just get over it because that’s what a family does.”

“Just like the flu, right,” said one woman. “People die from the flu also. To me, that’s just the way I look at it.”

Asked if she was concerned about so many people being at the beach, one woman replied, “No, not at all. There’s enough wind and air that it’ll clear it all out.”

“I just feel comfortable that we’re going to be ok,” said an older man when asked why he doesn’t wear a face mask. “The survival rate is so high…We’re all gonna get sick from something eventually.”

And in a demonstration of presidential leadership, a bearded young man said he was taking his cues from Donald Trump. 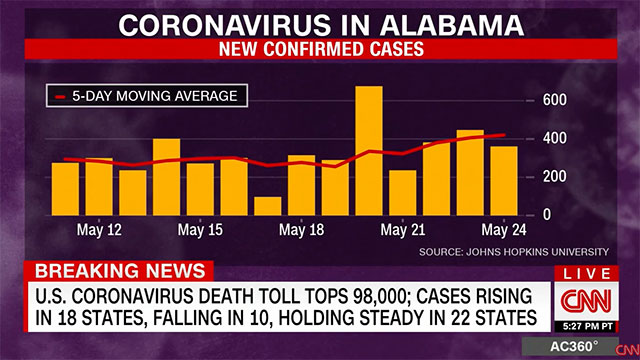 But it wasn’t just Alabama flouting the rules. Over in Missouri, public pool parties were just as busy.

Several videos taken from the Lake of the Ozark Saturday showed people not social distancing. Hundreds of people were packed into a pool and no one was seen wearing a mask.

Check out the report from local CBS News affiliate KMOV.