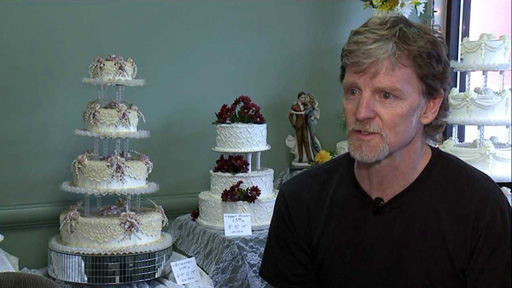 Not content to be a 2-time loser in court, Jack Phillips, a Colorado baker located in Lakewood, has decided to take his bigotry to the state Supreme Court after refusing to make a wedding cake for a same-sex couple which is in direct violation of the state’s public accommodation laws.

On Aug. 13, the Colorado Court of Appeals upheld two previous rulings and found that Masterpiece Cakeshop owner Jack Phillips cannot cite his religious beliefs or free-speech rights in refusing to make a wedding cake for a same-sex couple.

In 2012, Charlie Craig and David Mullins were turned away by Phillips while trying to buy a custom wedding cake. Mullins and Craig planned to marry in Massachusetts and wanted a cake to celebrate in Colorado.

Phillips told the couple that he would not make them a wedding cake because of his religious beliefs.

The petition, filed by Phillips’ attorneys on Friday, asks the state’s high court to decide whether Phillips’ religious beliefs about marriage are being violated. They’re also asking the justices to consider whether forcing Phillips to create an “artistic expression” that is against his religious beliefs violates his free speech rights.

“From Masterpiece’s inception, he has integrated his faith and work,” Phillips’ attorneys wrote in the filing. “Phillips also honors God through his creative work by declining to use his artistic talents to design and create cakes that violate his religious beliefs.”

Colorado law bans discrimination in a public place on grounds of sexual orientation.

To reiterate – same-sex marriage is not the problem here. A man refusing to serve people based on their sexual orientation, which is against the law in Colorado, is the issue.