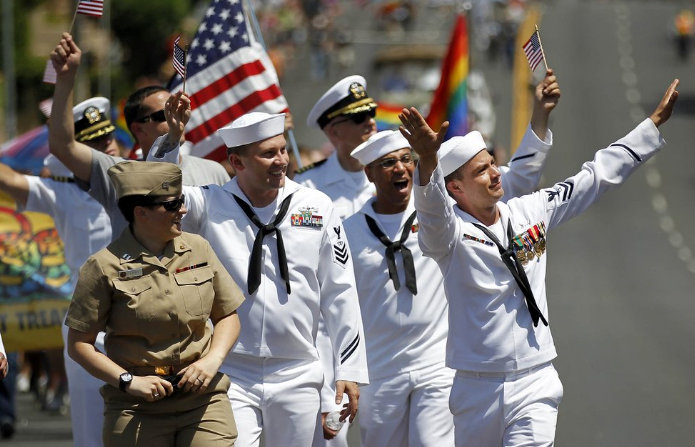 For the first time since the repeal of DADT, today in San Diego members of the military marched in a gay pride parade in full uniform. Earlier this week the Pentagon, which typically does not allow uniformed personnel to march in civilian events, said that it was making a one-time exception for San Diego Pride.

The loudest cheers from the parade crowd of nearly 200,000 were reserved for them. The U.S. military contingent included about 40 members — some active, some retired. As they assembled in the staging area, countless spectators took pictures of and with them. Most of the active-duty personnel said they were under orders not to give interviews although photos were fine. Sean Sala, 27, who left the Navy last year but helped organize the military group, said the significance of this year’s active-duty uniformed participants is bolstered by government approval for the first time. “I think everybody wants to make it a gay thing, but it’s just an American thing,” he said. “These are people that have laid down their lives for their country, you know, and they deserve recognition for their service regardless of their sexuality.”