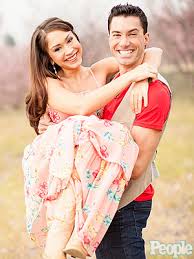 Via Press Release: Broadway and television star Diana DeGarmo and Broadway star Ace Young will head up the cast of the new touring production of JOSEPH AND THE AMAZING TECHNICOLOR DREAMCOAT. The new tour will launch at Playhouse Square in Cleveland, OH, on March 4, 2014.

One of the most enduring shows of all time, JOSEPH AND THE AMAZING TECHNICOLOR DREAMCOAT is the irresistible family musical about the trials and triumphs of Joseph, Israel’s favorite son. The first collaboration of Andrew Lloyd Webber (Jesus Christ Superstar, Phantom of the Opera, Cats) and Tim Rice (Jesus Christ Superstar, The Lion King), JOSEPH blends pop, country and rock into an uplifting, techni-colored story of biblical proportions.

The following cities have been announced for the national tour:

Additional cities and full casting will be announced at a later date.