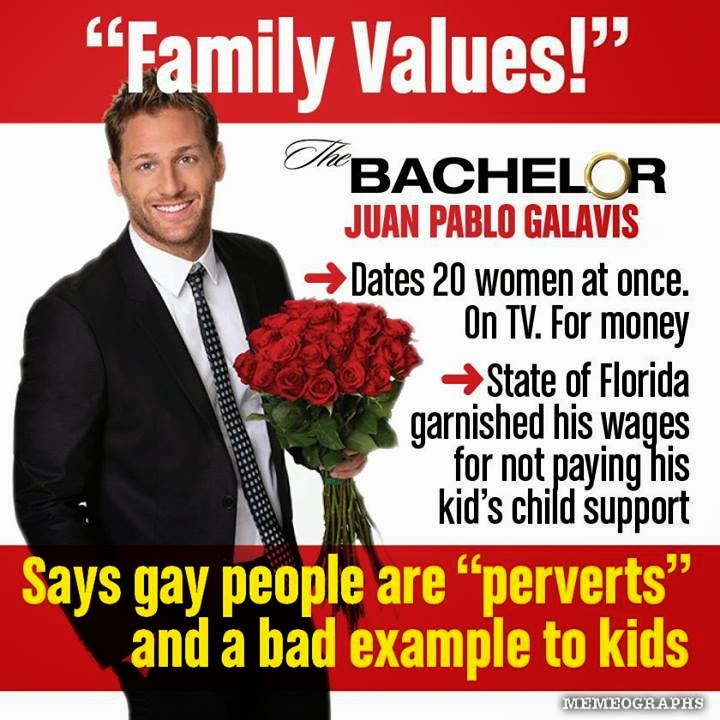 Between hot tubs and romantic moments, we’re used to participants on ABC’s The Bachelor expose themselves. But the latest “Bachelor” Juan Pablo Galavis may have exposed a bit more than he meant to when asked about the idea of a possible gay or bisexual “bachelor” in the future.

At a recent network party, Galavis was asked whether or not he thought the hit ABC reality show featuring a gay or bisexual bachelor would be a “good idea.” Galavis reportedly told The TV Page’s Sean Daly:

“No… I respect [gay people] but, honestly, I don’t think it’s a good example for kids…”

“There’s this thing about gay people… it seems to me, and I don’t know if I’m mistaken or not… but they’re more ‘pervert’ in a sense. And to me the show would be too strong… too hard to watch.”

Emphasis in the quote above is mine.

In the middle of the discussion, it should be noted that Galavis points out “his boy Peter at the party, who is apparently gay and Galavis “respects 100%.” Because if you have a gay friend you can’t be a homophobe, right?

In related news, according to RadarOnline, that staunch, moral family man that he is – Galavis reported had his wages garnished by the state of Florida for not paying child support for his two year old daughter.

Listen to his comments below.