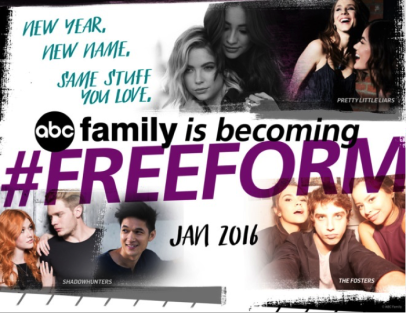 ABC Family is changing it’s name in an attempt to woo younger viewers.

The network will be known as FREEFORM come January 2016.

ABC Family’s decision to go for a new name was triggered by a gap in perception, said ABC Family President Tom Ascheim, noting that, according to research, core viewers understand the younger, social-media active brand while non-viewers associate it with wholesome and family-friendly programming. “We wanted to harmonize our content and out brand,” he said. “By achieving that harmony, we would be much better positioned to keep our core viewers and add new viewers.”

Despite dropping the ABC moniker which ties it to the Disney universe, “the freeformFreeform brand will be very much nestled in the Disney ethos — full of optimism and imagination, said Nigel Cox-Hagan, ABCF’s SVP Marketing, Creative and Branding.

ABC Family plans to use some of its top franchises, including flagship drama Pretty Little Liars and the popular 25 Days of Christmas holiday event, to promote the new branding. Additionally, there will be a big campaign around new drama Showdowhunters, which will be “ambassador for the new brand,” Cox-Hagan said.