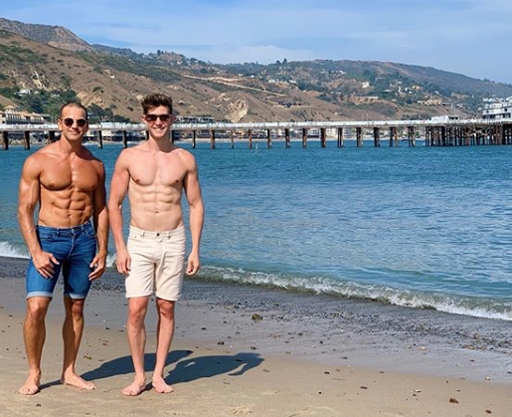 Several days ago, I reported on a post by Instagrammer Jeremy Cormier which pictured himself with his friend/“beach bro,” former quisling Republican Congressman Aaron Schock.

As many know by now, Schock resigned from office in 2015 amid scandal regarding allegations of misusing campaign funds for personal use.

While in office, the Illinois Republican, who was long-rumored to be in the closet, voted against LGBTQ rights such as supporting a constitutional amendment banning same-sex marriage and voting against the repeal of Don’t Ask Don’t Tell.

Schock disappeared from the public eye for some time but resurfaced this spring hanging out with shirtless gay men at the Coachella Music Festival. Photos and video also came to light showing Schock making out with a young man while working his hands down the guy’s pants.

There’s more, but you get the gist. In other words, it appears the ‘rumors’ were true.

Last week, Cormier a photo of the two on the beach with their impressive abs on full display, and the ‘influencer’ made a point to tag Schock (apparently they are “beach bros”) in the post.

Now, considering Cormier spends a great deal of time on social media (at least his abs do), he had to know there would be a response about his newly-announced “beach bro.”

And there most definitely were.

Comments on that post and subsequent posts asked Cormier his thoughts on Schock’s anti-LGBTQ voting record and how, as a proud gay, he could consort with the former lawmaker.

Instinctreached out to Cormier at the time via the email address shown in his Instagram account to ask his “side” of the story. To date, we haven’t received a reply.

In the new post, he acknowledges the “attention” the post received and the questions raised by some followers.

First up, he makes a point to clear the about the label of ‘influencer,’ saying he never claimed that title. But he assures readers that “if he were to try and influence anyone it would be to do something good.”

Cormier shares that he and Mr. Schock became friends at some point this year, but stresses he has never “shared or supported” the former congressman’s views he ‘espoused’ while in office.

The Instagrammer adds that to know Schock “is to know someone who’s viewpoint has grown and changed significantly in the last decade.”

Cormier contends that in order to “affect change open communication among those with differing views is essential.”

“The support our community enjoys can only grow when we reach out to those who don’t share our viewpoint,” he adds.

This is where I’ll point out (again) that here at Instinct we did reach out to Mr. Cormier and received no response. Not exactly the ‘open communication’ he seems to be espousing.

Turning the corner (or perhaps deflecting the issue at hand), Cormier then asks readers to donate to The Victory Fund, which works to help elect openly LGBTQ candidates to public office. He shares that he has already made a $500 donation himself.

Cormier goes on to say that in the days since he posted his photo tagging Schock, he has “experienced bullying and personal hatred” that he wouldn’t wish on anyone.

“That behavior can never be justified even when it’s directed toward those who don’t support us,” he adds. Cormier continues saying he encourages “everyone to fight against hatred and bullying wherever it exists.”

And in that spirit, he also announces he’s made a donation to The Trevor Project, the leading national organization that helps young LGBTQ people in crisis and offers counseling for those considering suicide.

Cormier draws his statement to a close stating he is not “perfect.”

“I am a normal, flawed individual and have never claimed otherwise,” says Cormier. “But what I do know is hate is toxic and it perpetuates – it is good for no one. I recognize this is only a small effort but let’s do something good together.”

Now, I appreciate the tenor and tone of the post.

But I feel Cormier misses both the point and an opportunity here. And, it feels a bit like he’s playing the victim card here.

After blithely posting a photo with someone who literally worked AGAINST the good of the LGBTQ community, with a caption of ‘beach bros,’ Cormier seems taken aback that anyone noticed or had a reaction.

In one sentence he shares that Schock has “grown and changed significantly.” But neither he nor Schock have addressed HOW he has changed.

The intrepid Instagrammer says open communication is key to effect change, but he doesn’t say if HIS conversations with the former congressman have been, in any way, to affect that change.

What LGBTQ people are up in arms about is Schock seeming to shrug off his past while playing with the gays in West Hollywood and tipping go-go boys in Mexico City.

After months of LGBTQ media noting these episodes and wondering, “Has he changed? Did he have some sort of epiphany?”, Schock remains silent.

For Schock’s part, he can easily sit down with a member of the LGBTQ media and openly discuss the journey to ‘here.’

Everyone comes out in their own time. Absolutely.

But folks don’t get to vote against their own marginalized community, then enjoy the benefits of that community that fought long and hard for its own rights while simultaneously playing the victim.

In a single interview, Schock can clear the air.

Hey, Aaron – call me. I promise to quote you in full; no ‘out-of-context’ action whatsoever.

Some folks may wonder why the LGBTQ media won’t let this go. Since this is my blog, let me put this in personal terms.

I didn’t meet my father-in-law for 17 years. Early on it was made clear he was uncomfortable with his son being gay. And, with my husband’s family living on the other side of the country, I was never invited to come to visit or get to know him.

Fine. I understood parents have to come to terms with a son’s coming out. So, it was what it was.

Finally, though, there came a time where we were all going to be in the same place at the same time – attending a concert by one of my husband’s client. By then, the dad was “used to” the idea of his son being married to a man, but it just wasn’t discussed.

With an impending face-to-face meeting on the horizon, my father-in-law told my hubby, “Fine, we’ll just meet at the concert.”

Now, after that time, I didn’t hold a grudge. But, the one thing I put my foot down about was I would not let 17 years of being ignored as a member of the family be swept away by a quick “Hi, nice to meet you” as the lights went down in a theater.

I insisted my hubby, his parents and I sit down for a meal the night before and actually get to know each other.

That’s what happened. It healed a LOT. Today, we are all fine and family.

In saying that, my point is: if Aaron Schock would reach out to the community he helped harm, and have the “open communication” Cormier espouses, I think many would feel somewhat easier about moving on from Schock and his past.

Regarding Cormier, I understand he would feel the need to say ’something’ about the controversial post.

View this post on Instagram
I realize the post I made the other day has gotten a lot of attention and raised questions about what I stand for. I’d like to address that now. Among other things, it has been assumed that my sole goal in life is to be an Instagram ‘influencer’ and while I have never claimed that, if I were to ever try and influence anyone it would be to do something good. So here’s what I have to say: Aaron Schock and I became friends in 2019. I do not now, nor have I ever shared or supported the views he espoused concerning LGBTQ rights while in Congress. Knowing him, is to know someone who’s viewpoint has grown and changed significantly in the last decade. To affect change open communication among those with differing views is essential. The support our community enjoys can only grow when we reach out to those who don’t share our viewpoint. In that vein I invite you to join me in donating to the @victoryfund , I have already donated $500. The organization works to elect openly LGBTQ persons to protect our community and advance equality. Since my post was made I have experienced bullying and personal hatred on a level that I would not wish on anyone. That behavior can never be justified even when it’s directed toward those who don’t support us. I encourage everyone to fight against hatred and bullying wherever it exists. To do that, please join me in donating to the @trevorproject , an organization fighting to provide crisis counseling to LGBTQ youth – many of whom have suffered from bullying. Once again, I have already donated $500 and invite others to donate as well. I’m not perfect. I am a normal, flawed individual and have never claimed otherwise. But what I do know is hate is toxic and it perpetuates – it is good for no one. I recognize this is only a small effort but let’s do something good together.
A post shared by Jeremy Cormier (@jeremycormier) on Aug 15, 2019 at 7:34am PDT