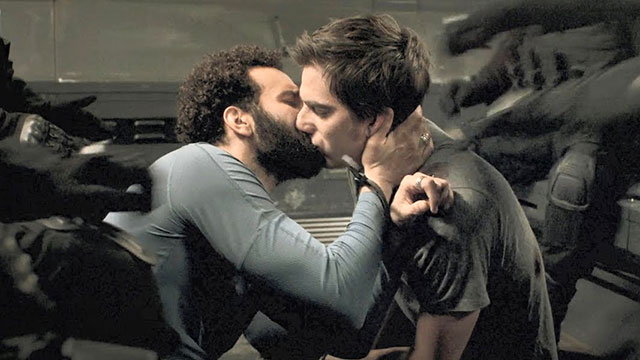 LGBTQ comic book fans have been waiting (and waiting, and waiting) to see actual queer superheroes on the silver screen for what feels like an eternity.

So imagine my surprise when guy-on-guy lip-lock action between two immortal superheroes occurred halfway through Netflix’s new big-budget action flick, The Old Guard, which premiered this past weekend.

The film stars Charlize Theron as the leader of a group of 6,000-year-old badass mercenary warriors. These immortals can feel pain but never die. As one says early in the movie, “Just because we keep living doesn’t mean we stop hurting.”

In the first half of the film, there are flickers of something going on between two of the heroes, Joe (Marwan Kenzari, best known for his turn as Jafar in the live-action Aladdin)) and Nicky (Luca Marinelli, honored at the Venice International Film Festival last year for Martin Eden).

A smile here, a glance there, but queer audiences have been teased before, so…

But near the mid-way point of the movie the two are kidnapped by a squad of military-types.

Tied up in the back of a van, Joe checks on Nicky. “I need to know he’s okay,” he tells one of his captors.

Military guy mocks Joe saying, “What is he, your boyfriend?”

“You’re a child,” says Joe as he launches into a deep declaration of love. “He’s not my boyfriend. This man is more to me than you can dream. He’s the moon when I’m lost in darkness, and warmth when I shiver in cold. And his kiss still thrills me even after a millennium.”

“His heart overflows with a kindness of which this world is not worthy,” continues the immortal. “I love this man beyond measure and reason. He’s not my boyfriend…he is all, and he is more.”

Ignoring their kidnappers, Nicky tells Joe with a smile, “You’re an incurable romantic,” as he leans in for a deeply intimate kiss.

According to Vulture, Greg Rucka – who penned the acclaimed graphic novel and is credited with the movie’s screenplay – stipulated in his contract that if and when a movie of The Old Guard was made, that scene would have to be included.

While we’ve certainly seen same-sex kisses in movies before, we can’t recall a smooch like this in a $70 million action film led by star power the likes of Charlize Theron. This is some big-deal exposure.

To underscore how big a deal this is, Forbes reports the superhero flick was Netflix’s most-watched movie this weekend and posits there very well could be a sequel ‘in development’ announced after the boffo debut.

The Old Guard is currently streaming on Netflix, and you can check out the full trailer below.