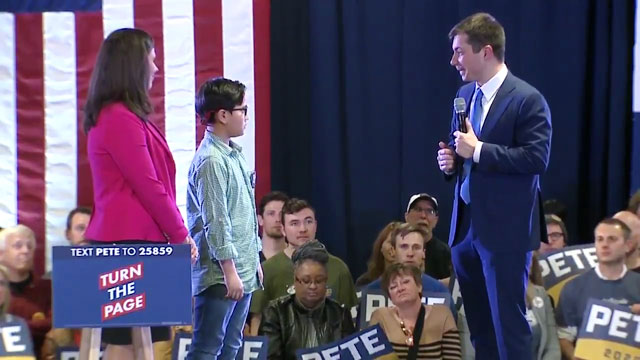 “Thank you for being so brave,” said Zachary Ro in a question read by Colorado Secretary of State Jena Griswold. “Would you help me tell the world I am gay too? I want to be brave like you.”

“Well, I don’t think you need a lot of advice from me on bravery,” said Buttigieg as the crowd roared its approval. “You seem pretty strong. It took me a long time to figure out how to tell even my best friend that I was gay let alone to go out there and tell the world. To see you willing to come to terms with who you are in a room full of a thousand people, thousands of people you’ve never met, that’s really something.”

Amid the cheers for Ro, Mayor Pete did offer a couple of thoughts to young Zachary.

“The first thing is that it won’t always be easy, but that’s OK because you know who you are,” shared the 38-year-old candidate. “And that’s really important because when you know who you are, you have a center of gravity that can hold you together when all kinds of chaos is happening around you.”

“The second thing I want you to know is that you’ll never know who’s taking their lead from you, who’s watching you and deciding that they can be a little braver because you have been brave.”

“When I was trying to figure out who I was, I was afraid that who I was might mean that I could never make a difference, and what wound up happening instead is it’s a huge part of the difference I get to make,” added Buttigieg. “I never could have seen that coming, and you’ll never know whose life you might be affecting right now just by standing here. There’s a lot of power in that.”

Buttigieg closed the moment with the one thing every young LGBTQ kid needs to hear: “The last thing I want you to know is that even if I can’t promise it’s going to be easy, I’m going to promise that I’m going to be rooting for you.”

The 9-year-old also gave Mayor Pete with a friendship bracelet, which the candidate proudly put on.

Powerful moment (better audio): 9 year old Zachary Ro of Lone Tree asks @PeteButtigieg how he can be brave and tell people he is gay too pic.twitter.com/1aUbYM8cDM

Zachary said he didn’t come to the event planning to ask the question. It was a spur-of-the-moment thing written down on a piece of paper and handed to volunteers collecting questions as he entered the rally Saturday night.

Griswold told the Colorado Sun Zachary’s came up randomly. She was pulling questions gathered in a bowl and didn’t know whose questions she was grabbing.

Afterwards, a reporter asked young Ro why he sought out Mayor Pete’s advice.

“I feel inspired by seeing Pete being openly gay and running for president at the same time, and someday I want to be like him,” said young Zachary. “I feel like he gave me some really good advice.”

I caught up with 9 year old Zachary after he was brought on stage and asked @PeteButtigieg his question. His dad told me off camera he was proud of his son. pic.twitter.com/CsO60aQiUh