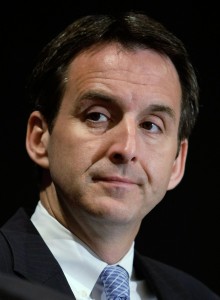 1. Pawlenty proudly opposes recognition of any same-sex unions: In a recent interview on FOX News, he told Greta Van Susteren that he will “never be at the point where I say all domestic relationship[s] are the same as traditional marriage. They are not.”

2. Pawlenty supports maintaining Don’t Ask Don’t Tell, rescinding funding to implement its repeal, and perhaps not allowing gays and lesbians to serve at all.

3. Pawlenty regrets his vote as a state legislator supporting nondiscrimination protections based on gender identity.

4. Pawlenty vetoed a bill extending end-of-life rights to same-sex couples. In addition, same-sex couples continue to be limited in the ability to seek restitution for wrongful death.

For more detail, check out Zack Ford’s excellent article on the issues listed above.