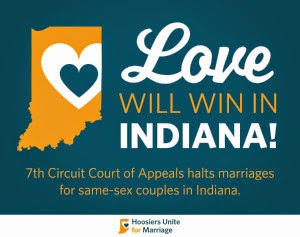 The 7th Circuit Court of Appeals granted a motion by Indiana’s attorney general to stay an earlier ruling overturning the state’s same-sex marriage ban, effectively halting the issuance of same-sex marriage licenses in the state.

In the motion, Zoeller says a stay is needed to “stem the long-term negative impact that may be created by hundreds, if not thousands, of same-sex marriages that ultimately may prove to have no basis in law.”

I love how Zoeller says “ultimately may prove to have no basis in law.” Wishful thinking on his uber-conservative part.   It’s clear where this is all headed.

Marion County alone issued 586 marriage licenses in the past two days; the majority of those to same-sex couples.

From Hoosiers Unite for Marriage:

“We are extremely disappointed that the court has issued this stay, and we are committed to protecting the freedom to marry in Indiana,” the statement read. “More than anything, this is a terrible blow to the legally wedded Indiana couples and their families who were finally — after so long — recognized this week under Indiana law.”