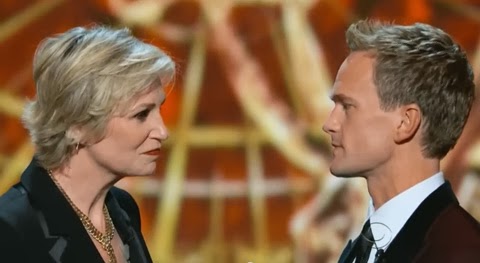 In one of the few fun things about last night’s Emmy Awards, Neil Patrick Harris tried to open the Emmys, but was interrupted by past hosts of the show, including Jimmy Kimmel, Jane Lynch, Jimmy Fallon, Conan O’Brien, and finally Tina Fey and Amy Poehler.

Replied Harris: “Oh, c’mon Jane. I don’t think anyone who watched that night thought of you as a woman.”

Lynch: “I’m gonna show you just how much of a woman I am Harris.”