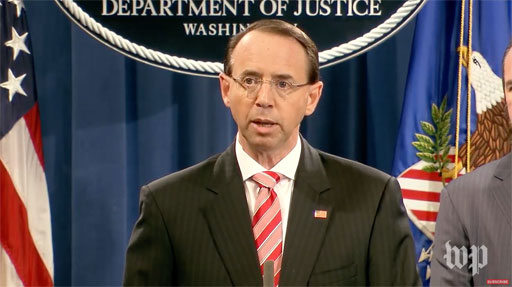 The 12 were members of a Russian military intelligence agency known as the GRU and are accused of engaging in a sustained effort to hack the computer networks of Democratic organizations and the Hillary Clinton campaign.

Deputy Attorney General Rod J. Rosenstein detailed the new charges at a midday news conference. Mueller, as has been his practice, did not attend the announcement. Court records show that a grand jury Mueller has been using returned an indictment Friday morning.

The announcement comes days before President Trump is due to meet with Russian President Vladi­mir Putin in Finland. Rosenstein said he briefed Trump earlier this week on the charges.

The 11-count indictment spells out in granular detail a carefully planned and executed attack on the information security of Democrats, implanting hundreds of malware files on Democrats’ computer systems, stealing information, and then laundering the pilfered material through fake personas and others to try to influence voters’ opinions.

According to the indictments, the hacked emails were released under the names DCLeaks and Guccifer 2.0

For months, Donald Trump has called the idea of Russian interference in the 2016 a “made-up story.”

The White House issued a statement following the announced indictments which notably does not condemn Russia for interfering in our election:

• “There is no allegation in this indictment that Americans knew that they were corresponding with Russians.

• There is no allegation in this indictment that any American citizen committed a crime.

• There is no allegation that the conspiracy changed the vote count or affected any election result.”

Today’s charges include no allegations of knowing involvement by anyone on the campaign and no allegation that the alleged hacking affected the election result. This is consistent with what we have been saying all along.”

Donald Trump’s lawyer, Rudy Giuliani, took to Twitter in an attempt to mislead the American public once again.

He tweeted, “The indictments Rod Rosenstein announced are good news for all Americans. The Russians are nailed. No Americans are involved. Time for Mueller to end this pursuit of the President and say President Trump is completely innocent.”

That is not what the Deputy Attorney General said today. Rosenstein stated that no Americans were being indicted today. Please note the very specific use of the phrase “in this indictment” over and over in Rosenstein’s announcement. He didn’t say all Americans are innocent.

You can watch Rosenstein’s announcement below.

“Donald Trump likes to describe this as a witch hunt—well, we just found some witches.” https://t.co/BHK5sr6LRC pic.twitter.com/iM4foV6bou

With new indictments of 12 Russian military officers over 2016 election hacking and infiltration efforts, a flashback to our 2017 Lie of the Year: @realdonaldTrump saying Russian election interference is a “made-up story.” https://t.co/QpeD9Tx5ry pic.twitter.com/I4wL5OyTDx

The indictments Rod Rosenstein announced are good news for all Americans. The Russians are nailed. No Americans are involved. Time for Mueller to end this pursuit of the President and say President Trump is completely innocent.