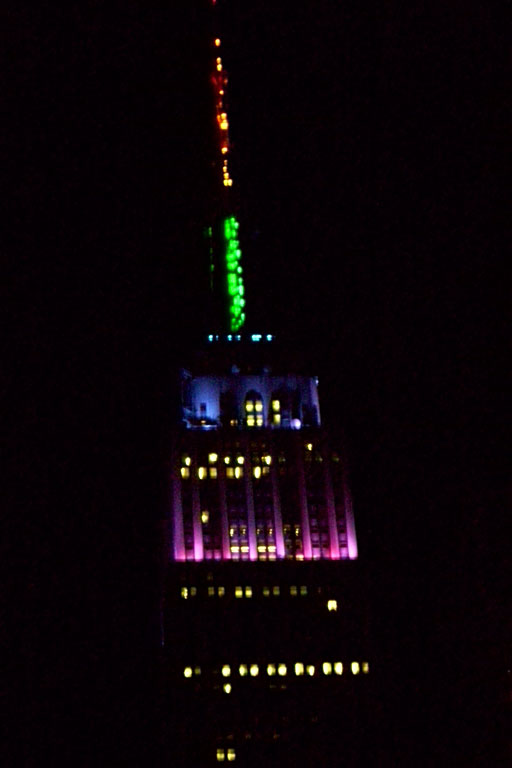 There could not have been a more ideal setting for World Pride Closing Ceremonies than Times Square at the “crossroads of the world.”
As twilight fell across New York City and Pride marched on down in the Village, thousands gathered for a star-studded finale to Pride Month for one last official celebration of the LGBT+ Community where it all began.
It was electric, fabulous, fierce, funny, emotional, and PROUD.

Grammy Award winner, Melissa Etheridge took to the stage opening the evening with her brand of ferocious acoustic music which has inspired both the LGBT+ community as well as cancer survivors for decades.

Cho said she “prefers being a ‘Bear Hag’ because she knows there’s going to be food, with “twinks there’s no regularly scheduled meals.” She also pointed out that “twinks are having so much work done, they look like a “queer caught in headlights.”
Later, Cho did a full discussion of her “fat pussy” with surprisingly detailed descriptions of different kinds, ie Keto, sandwich, etc. Watching the muscle-stud ASL interpreter sign her graphic descriptions was hilariously horrifying.

Broadway’s The Prom stopped by strutting their stuff in a celebration of Love is Love with the entire cast thrilling the audience with the show’s finale, “It’s Time to Dance.”

Big electrifying numbers from MNEK, Spice Girl Melanie C with Sink the Pink, and Jake Shears wowed the capacity audience, but it was an unexpected small moment that spoke to the occasion.

Accompanied only by a guitar closing out his set, Shears sang:
Why are there so many
Songs about rainbows
And what’s on the other side
Rainbows are visions
They’re only illusions
And rainbows have nothing to hide
So we’ve been told and some chose to
Believe it
But I know they’re wrong wait and see
Someday we’ll find it
The Rainbow Connection
The lovers, the dreamers and me

Those who came together last night as a global community united in pride were not prepared for what happened next.

In a flowing white gown, Deborah Cox took the stage like a twister hitting Dorothy’s farmhouse with “Absolutely Not,” and from her Broadway debut in Aida at the Palace Theatre across the street, “Easy as Life.”

Cox talked about spending 18 months touring in The Bodyguard the Musical in Whitney Houston’s iconic role. On the giant video screen, a rainbow ribbon could be seen on her dress.


She explained, it wasn’t just a rainbow ribbon but an “Orlando Ribbon,” given to her by a survivor of the Pulse Nightclub massacre. Dedicated to their memory she sang, “I Will Always Love You” as tears streamed our cheeks.

I don’t know if at Pride Island they could hear what was happening in Times Square; but if they did, what they heard was, “Madonna, go home and try again.”

Deborah “Nobody’s Supposed to be Here” Cox Threw. It. Down. and blew it up! Taking a crowd from emotional heartbreak to ecstatic joyous dance party like it’s nothin but a thing takes a fierce dancefloor diva. It was a feat not many performers could pull off. Deborah Cox didn’t just drop the mic, she dropped it, buried it, never to be seen again.

Special thanks to Lawrence Pfeil Jr. for his awesome work this weekend as special World Pride correspondent for The Randy Report!

Make sure you click over to his own site, theOUTfront.com, for more of his uplifting pride and prose.