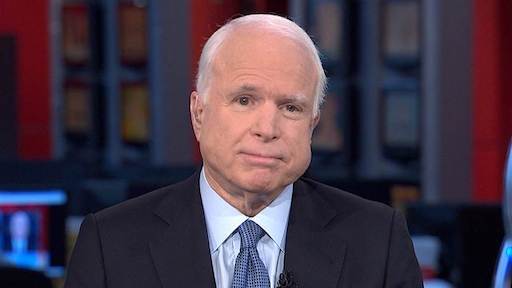 In an excerpt from his new book, The Restless Wave, Sen. John McCain admits that, in light of his cancer diagnosis and his leaving public office at the end of this year, he now feels free to speak his mind “without fearing the consequences.”

McCain also takes a swipe at Donald Trump for caring more about “a reality show facsimile of toughness” than American values.

“This is my last term. If I hadn’t admitted that to myself before this summer, a stage 4 cancer diagnosis acts as ungentle persuasion,” he wrote in his book, “The Restless Wave,” according to the excerpt published on Apple News on Monday. “I’m freer than colleagues who will face the voters again. I can speak my mind without fearing the consequences much. And I can vote my conscience without worry.”

Referring to President Donald Trump, McCain wrote, “He has declined to distinguish the actions of our government from the crimes of despotic ones. The appearance of toughness, or a reality show facsimile of toughness, seems to matter more than any of our values.”

For much of McCain’s career in politics I’ve admired him as a self-styled “maverick.”

But, unfortunately, this admission doesn’t sound like the maverick we once knew. “Voting his conscience” and “speaking freely” is what folks wanted from McCain all along.