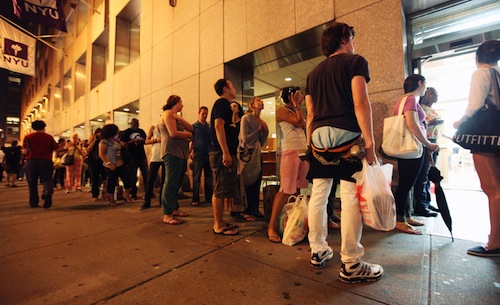 Parts of New York City are under evacuation orders, with more than 370,000 people ordered to leave low-lying areas as Hurricane Irene approaches the city. But on Saturday afternoon, at least, some residents were making the most of it.

NPR’s Jim Zarroli reports for All Things Considered that “Frankly Wines, a small shop just outside the evacuation zone, was doing a pretty brisk business today. Owner Christy Frank lives around the corner. Late August is normally a slow time, she says, but Irene has been great for business.

“We’ve been calling it the ‘hurricane stimulus package,'” Frank said. “It’s definitely been good for business. I have a number of other friends who own wine stores elsewhere in the city, and after yesterday, we were all just beat. It was like the day before Thanksgiving, or New Year’s Eve.”

These are my people.  Let’s get the important things taken care of.