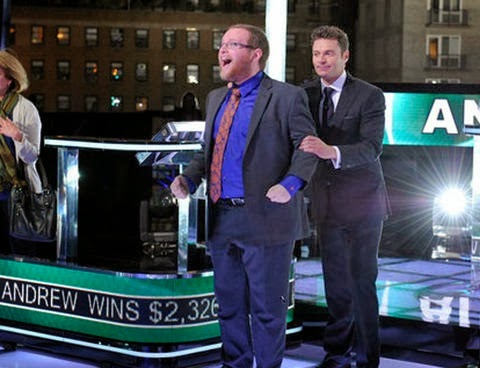 Do you like game shows for the “winning excitement?”  Let’s cut right to the chase.

Just graduated from Columbia Law School, this grad is already able to pay off his student loans.

Andrew Kravis is a public interest lawyer about to start a fellowship at Lambda Legal, the nation’s oldest and largest legal organization working for LGBT civil rights. He was honored upon graduating from CLS as one of two students “who have demonstrated outstanding achievement in the furtherance of lesbian, gay, bisexual, and transgender rights.”

Last night, he dramatically won $2.6 million on NBC’s new show “Million Second Quiz.” The winnings were originally about $2.3 million, but Ryan Seacrest just rounded it up to make it a record win!

I don’t know if Andrew is gay or just gay friendly, but this was pretty cool to watch.