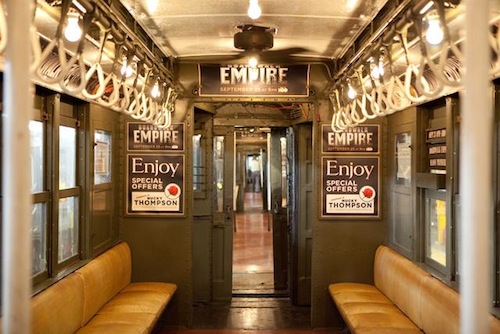 New York City subway riders will get a treat in September when the MTA puts a historic restored vintage subway train in service on the 2/3 Express Track – Saturdays and Sundays from 12-6pm.

HBO’s “Boardwalk Empire” is sponsoring the trainset.  As such, it will be branded in period “Boardwalk Empire” style. For the weekend of the season premier — September 24 and 25 — so-called “brand ambassadors” will be giving away free MetroCards as well.

Originally operated by the Interborough Rapid Transit (IRT) system, the train began service back in 1917 and will once again be operational. Customers who have the opportunity to ride the vintage train will be transported back in time to the Prohibition era with authentic details such as rattan seats, ceiling fans and drop sash windows, as well as a custom branded interior featuring Boardwalk Empire-inspired period artwork.