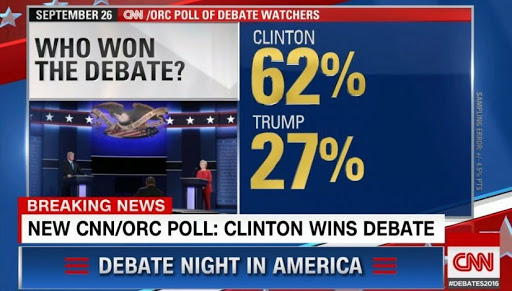 I won’t go into all the details right here – tomorrow is another day – but I will leave you with this.

According to the CNN/ORC poll, Hillary Clinton won the first presidential debate by 35 points.

PPP notes that among young voters, who Clinton has under performed with, 63% think she won the debate to only 24% for Trump.

I watched the full debate, and as most political teams are acknowledging, Hillary did very well. Preparation paid off.

Trump, on the other hand, was exactly who we might have expected to show up.

Suffice to say, it was a good night for the good guys.

For historical context, let’s look back at the first 2012 presidential debate: