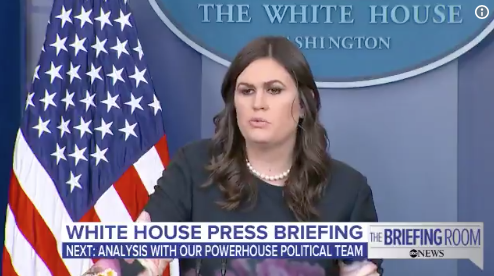 Even though he’s played more golf in his first year than any other president, it’s the White House spin that Donald Trump’s time on the golf course has been valuable for “relationship building.”

Reporter: “Can you tell me the biggest single thing the president has accomplished for the American people during his time on the golf course?”

I wonder how long it took the geniuses in the press office to think that up?

According to White House press secretary Sarah Huckabee Sanders, it’s really only the press that has an issue with his 91 golf trips.

When asked about the transparency issue of non-confirmation of rounds of golf, Sanders pivoted back to the predictable claim that Trump enjoyed one of the “most successful first years in office” of any president.

I’m guessing that’s kinda like “passing the most legislation” since Truman lie?

Press Sec. Sanders: Pres. Trump has used golf to develop “deeper and better relationships with members of Congress…we’ve had an extremely successful 2017, and some of that’s due to the relationship building he was able to do there.” https://t.co/NkJuIoh4fP pic.twitter.com/nzUUVH5c6g