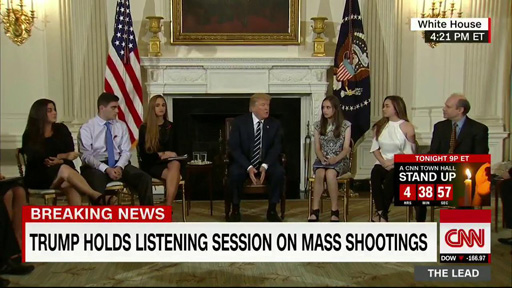 Donald Trump hosted a “listening session” at the White House today inviting students who were present at the Parkland, Florida, shooting last week as well as parents who lost children in the Sandy Hook massacre five years ago.

I’ll say up front the crowd seemed to be very “Trump-friendly” in makeup.  Lots of “I think you’re doing a great job” was heard throughout the discussion.

One of the prevailing ideas seemed to be arming and training teachers with guns as a solution. Trump calls it “concealed carry for teachers.”

My first thought upon hearing that is that every on-duty police officer who was shot in the line of duty was armed. Armed and trained to use their firearm.

What is a 7th grade social studies teacher with 30 frightened students going to do with a Glock?

I don’t know what the answers are although I think universal background checks for all gun purchases would be a good start.

And 97% of Americans agree with that concept according to the latest polling.

I think if you can’t legally buy a drink or are on a ‘no-fly’ list, you shouldn’t be able to buy a gun.

I do think sane adults should be able to buy the hunting rifle they desire after passing a background check.

The founding fathers had no idea when they penned the Constitution we would have such weapons of mass destruction like AR-15s.

There will be an open Townhall on CNN tonight airing at 9ET/6PT.

Feel free to leave your thoughts in the comments section below.

President Trump on concealed carry for teachers: “If you had a teacher who was adept at firearms, they could very well end the attack very quickly.” pic.twitter.com/dQWl1foLii

Less than two years ago, Trump argued AGAINST more guns in schools:

Crooked Hillary said that I want guns brought into the school classroom. Wrong!

And here is Sam Zeif, whose texts with his brother during the shooting went viral, pleading for a change in gun laws: https://t.co/TMt0ULliiP

Father of Sandy Hook victim: “Schoolteachers have more than enough responsibilities right now than to have to have the awesome responsibility of lethal force to take a life.” pic.twitter.com/ZdoaxGYjcC

A kid too young buy a handgun should be too young to buy an #AR15. Working with @SenFeinstein on a bipartisan bill that will raise the minimum purchase age for non-military buyers from 18 to 21 – the same age you currently have to be to purchase a handgun.— Jeff Flake (@JeffFlake) February 21, 2018

I want to know why Emma Gonzalez and the Parkland students in the national spotlight aren’t at the President’s listening session. The focus seem to be focused on everything but easy access to guns.

We uh… were not invited.

But we have important things to do and talk about, we don’t have time to thank these people for taking half a step in the right direction.