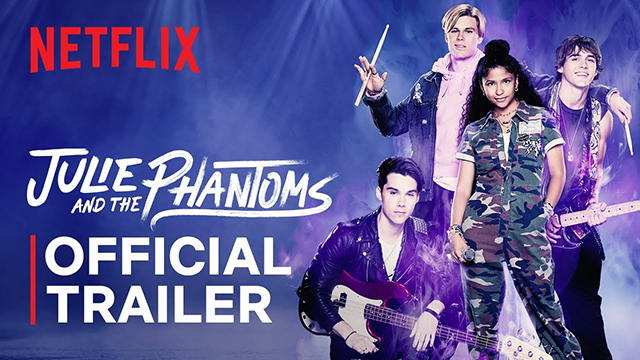 Director/choreographer Kenny Ortega (High School Musical, This Is It, Xanadu, Hocus Pocus) knows a little something something about finding magic with a mix of teens, music and passion.

His latest is Julie and the Phantoms, a new Netflix series that follows the journey of a gifted teen girl, Julie (played by newcomer Madison Reyes), who’s lost her drive for music after her mother’s death.

But when the ghosts of three dreamy musicians from 1995 – Alex (Owen Joyner), Luke (Charlie Gillespie), and Reggie (Jeremy Shada) – appear, they reawaken Julie’s own inner spirit and create a new band together: Julie and the Phantoms.

It seems the guys, known back in the day, as pop/punk band Sunset Curve, were on the road to stardom before their untimely deaths due to ‘bad hotdogs.’ But now they’re back to settle some unfinished business.

One twist: they can only be seen by mortals when they play their pop bops with Julie. But that doesn’t stop the sparks from flying between Julie and guitar-toting Luke.

Out actor Cheyenne Jackson (American Horror Story) has a recurring role as mysterious antagonist Caleb Covington who is somehow involved in a limit on the guys’ time among the living.

There’s an LGBTQ aspect to the series as Alex, the blond drummer who came out as gay shortly before his death, crushes on Willie (Booboo Stewart), a charming skater boy who might know more about ghostly things than he lets on.

Even though the series dropped today, there’s already a tribute video for the show’s adorable gay couple.

Ortega definitely brings some High School Musical vibe (with a touch of Scooby Doo) with some peppy pop song performances (all the songs are pretty catchy) and of course, a blond nemesis for Julie since the series does take place in a high school setting.

All nine episodes of the new series, based on the original Brazilian series Julie e os Fantasmas, are available now on Netflix.