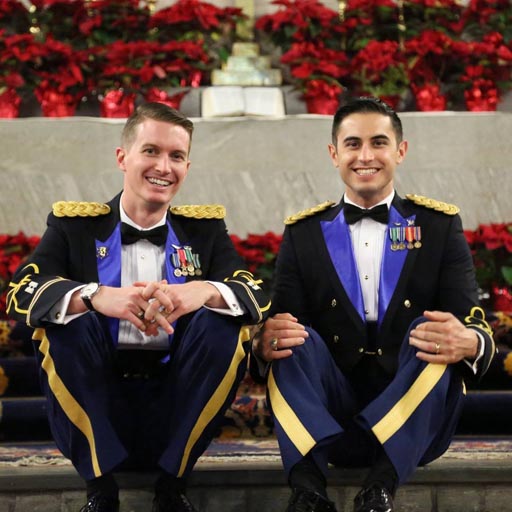 Captain Daniel Hall and Captain Vincent Franchino, both Apache helicopter pilots, were wed in Cadet Chapel in a ceremony officiated by a Unitarian Universalist minister.

The two met at the academy in 2009, when Hall was a senior and Franchino was a freshman, and Don’t Ask Don’t Tell was still a year away from being repealed.

“We’ve experienced everything from people feeling awkward around us to being called faggots while holding hands and walking down the street, stuff like that,” Franchino told The New York Times. “But despite what we’ve been through, nothing was worse than having served during the ‘ Don’t Ask Don’t Tell’ years.”

Through those years he and Hall had to keep their sexuality—and their relationship—secret.

“It’s really frustrating when two people have feelings for each other but are not allowed to act on them,” he tells the Times. “We were serving under a policy that was telling all of us—perfectly capable soldiers, sailors, airmen and marines—to lie about ourselves.”

Thirty-four military officers attended the couple’s wedding and honored them by raising their sabers in a military arch for the couple.

It’s important to note that this wasn’t the first same-sex wedding at West Point. That distinction goes to Sue Fulton and Penny Gnesin in 2012.

In 2013, Larry and Daniel Lennox-Choate became the first male same-sex couple to wed at the military academy.