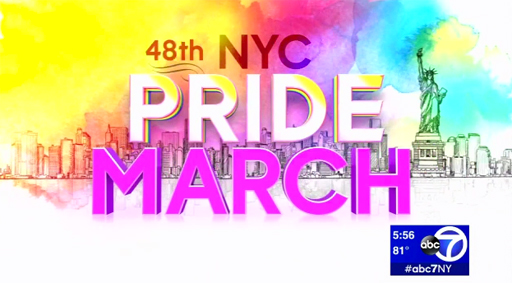 It’s NYC Pride Day! And this year you can watch the parade/march via streaming video from local ABC affiliate, ABC7.

The NYC Pride March started in 1970 as a civil rights demonstration on the 1-year anniversary of the Stonewall Uprising.

Today, it is one of the world’s best known LGBT events, with 350 marching contingents and more than 2 million spectators in 2016.

WABC-TV will broadcast the annual trek down Fifth Avenue from Noon -3 p.m. on Channel 7 and also stream the event on its website, abc7ny.com.

This year’s theme, “We Are Proud,” speaks to the LGBT community’s unwavering ability to rise and be proud, even in the face of the existing political environment. The American Civil Liberties Union, Brooke Guinan (trans woman, FDNY firefighter), Krishna Stone (Director of Community Relations, GMHC), and Geng Le (Founder, Blued) will helm 2017’s iconic March.

The livestream has ended but ABC7 has posted the entire broadcast in segments here.

I really encourage you to check it out. Amazing, beautiful job capturing the tone and size of the march