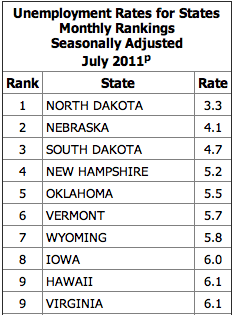 Or rather – he DOESN’T answer the question.

History actually shows that job creation does not track with lower taxes.

As a matter of fact, while Rick Perry is traveling around touting Texas’ low taxes (no state tax) his state actually has 8.4% unemployment (July 2011), ranking 27th. If Perry is such a genius and creating so many jobs, why is unemployment that high?

As a matter of fact, of the 10 states with the lowest unemployment rates for July 2011 – 8 have state income taxes. (South Dakota and Wyoming do not).

Do the math kids…