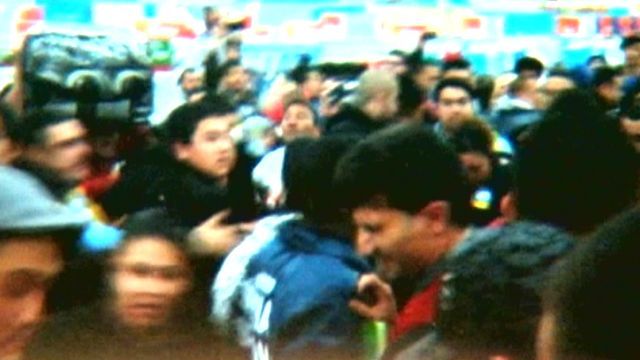 A southern California woman turned herself in to authorities as the person who pepper sprayed video-game shoppers in a Walmart during Black Friday’s shopping frenzy, Los Angeles police said Saturday.

The woman has not been charged because detectives are continuing their investigation into the incident that required firefighters to treat 10 people for exposure to pepper spray, authorities said.

“We have her identity and we know who she is and where she is at. When appropriate action needs to be taken, we know where to find her,” said Officer Bruce Borihanh, a police spokesman. “She’s a suspect, but she’s not booked or anything, so we’re not releasing her name.

The pepper-spraying incident, which occurred in a Walmart in the nearby Los Angeles neighborhood of Porter Ranch, occurred Thursday night.

Black Friday shopping was marked by violence in at least seven states, including California.

At the Walmart in Porter Ranch, the pepper-spraying incident occurred when a woman doused fellow shoppers with the spray as people were grabbing for Xbox video game consoles, police said.

The suspect was able to pay for her purchases and leave the store before police arrived, authorities said.

One witness to the incident, Juan Castro, said he and other shoppers were hunting for “deals,” when a woman began using pepper spray. He was trying to buy a Wii video game at $20, marked down from a typical $60, he said.

“I don’t know if she felt threatened or she felt she had to do that to get what she wanted,” Castro told CNN on Friday.

Violent incidents also occurred in South Carolina, North Carolina, Florida, New York, Alabama and Connecticut, with most of the reported incidents happening at or near Walmart stores.