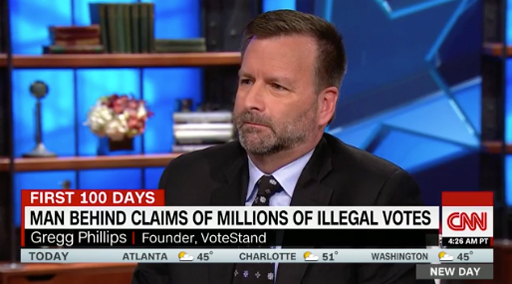 Phillips actually made his claims of “voter fraud” via Twitter long before the certified results of the election were made public.

This is the tweet that caught Donald Trump’s attention three days after the election.

And while confident of his theory, he tells CNN’s Chris Cuomo he doesn’t currently have the evidence to prove it.

“We believe it will take probably another few months to get this done,” Phillips said of when his team will be ready to publicly offer proof that he insists is ironclad.

“Even though you can’t prove it, you think you know?” a confused Cuomo asked.

Cuomo again pressed Phillips for how he could claim to know for certain that Clinton received millions of illegal votes without currently having the proper evidence to back up such a conclusion.

“You can reach a conclusion, and then still verify it,” Phillips responded.

Elsewhere in the segment, Cuomo questioned Phillips’s purported methods for finding voter fraud were at all precise, and he responded by saying, “We are as precise as we need to be.”

No sane person believes that 3 million people somehow fraudulently worked in a concerted effort to elect Hillary Clinton president. IF such an undertaking took place, why would the focus be on California and New York where Hillary was certain to win anyway, and not in swing states like Florida or Pennsylvania?

Watch the CNN interview below:

Man behind claim of millions of illegal votes says it will be months before he can provide full evidence https://t.co/puQ7tCOpf5

“It’s just like the birther claims” — Carl Bernstein on the man who says he has proof that millions voted illegally, but would not show it pic.twitter.com/GsDew7JZ5Q