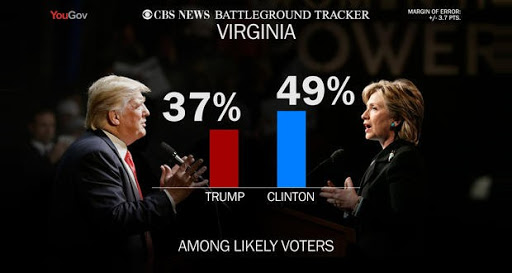 Democrat Hillary Clinton has opened up a 12 point lead in the battleground state of Virginia, according to the latest CBS News Tracker poll.

The former Secretary of State rakes in 49% support while businessman Donald Trump received only 37% support from likely voters.

Clinton’s high numbers come in part due to the fact that she has nearly universal support from her party – 95%. Trump only garners 79% of Republicans.

Also adding to the widening gap, Clinton seemed to have wooed a swath of those Republicans, 6%, to her column.

And in surprising news, Trump holds only a two point lead in deep red state, Arizona.