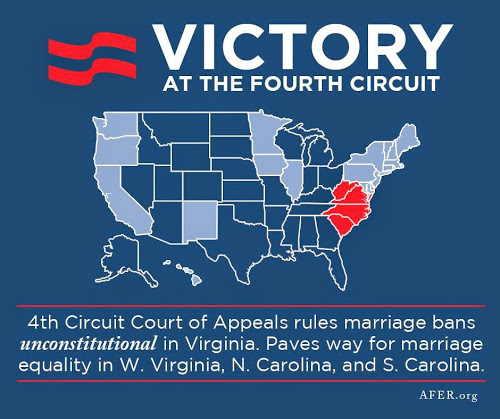 Now, a three-judge panel at the 4th Circuit Court of Appeals has upheld that ruling.

The U.S. Court of Appeals for the Fourth Circuit has affirmed that Virginia’s marriage ban is unconstitutional because it violates the Equal Protection and Due Process Clauses of the Fourteenth Amendment to the United States Constitution. Today’s decision sends the message that loving couples like our plaintiffs – Tim Bostic & Tony London and Carol Schall & Mary Townley – are entitled to the same basic rights and protections as every other American.

Hollingsworth v. Perry, the AFER-led challenge to California’s Proposition 8, was the first lawsuit in which a federal court of appeals ruled in favor of marriage equality.

Today’s decision is monumental as it also paves the way for West Virginia, North Carolina, and South Carolina to strike down their marriage bans as those states fall under the jurisdiction of the U.S. Court of Appeals for the Fourth Circuit.

This ruling sets a high-court precedent, meaning that judges who hear subsequent marriage challenges in North Carolina, South Carolina and West Virginia (the other states covered by the Fourth Circuit) should apply the precedent.

Marriage equality has been legal in Maryland, the fifth state in the Fourth Circuit, since January, 2013.

This marks the 29th court ruling in favor of marriage equality since SCOTUS struck down Section 3 of DOMA in June of 2013.

Freedom To Marry issued this statement:

“The Fourth Circuit’s ruling echoes what over 25 other federal and state courts have held: same-sex couples deserve the dignity of marriage, and anti-marriage laws are indefensible.

“Every day of denial is a day of injustice and tangible harms. It’s time for the Supreme Court to bring the country to national resolution and secure the freedom to marry for all.”