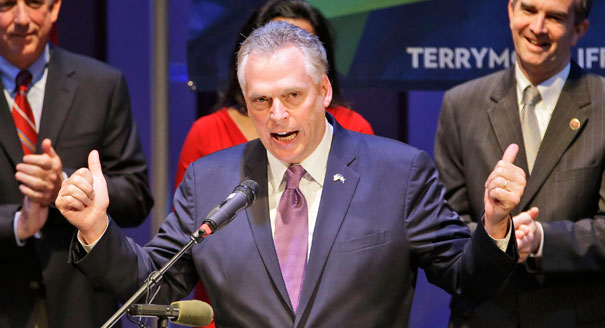 In the new poll, McAuliffe draws support from 48 percent of likely voters, versus 44 percent for Cuccinelli. Pollster Andrew Myers says the main trends driving McAuliffe’s lead are a huge gender gap and defections from moderate Republicans.

“McAuliffe leads among women by 12 points, 52 to 40 percent, while the race essentially falls within the margin of error among men, 44 to 48 percent,” Myers writes. “Importantly, signaling a sign of potential trouble for Cuccinelli among his base, among self-described moderate Republicans, McAuliffe earns double-digit defections with 11 percent in his column, while 78 percent back Cuccinelli today. In contrast, McAuliffe sees virtually no defections among conservative Democrats.”

The poll is the second in two days to show McAuliffe, the former Democratic National Committee chairman, up in the mid-single digits. A Quinnipiac University survey published Tuesday also put him at 48 percent, with a 6-point lead over Cuccinelli.