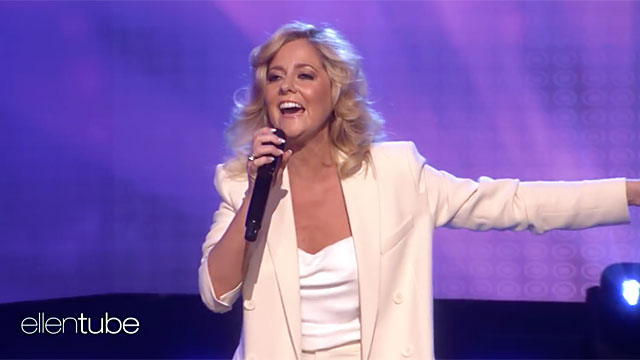 What a great feel-good story to get you over Hump Day!

You may have seen the viral video clip zooming around social media of a woman stopped in the London subway by video blogger Kevin Freshwater. In the video, Freshwater thrusts his microphone into the face of Charlotte Awbery asking her to ‘finish the lyric’ as he begins the Lady Gaga smash hit, “Shallow.”

Unsure of where the moment was going, Awbery tentatively picks up the next line of the song. And as Freshwater continues to react to her singing, she kept going eventually belting out the high section of the Academy Award-winning tune.

It turns out Awbery IS a professional singer who performs at weddings, pubs, and other venues. But when the viral video took off, so did her social media following.

Of course, it’s no surprise that Ellen DeGeneres would fly the blond singer to Los Angeles to celebrate the serendipitous episode.

After belting out “Shallow” for Ellen’s audience she sat down with the talk show host who ticked off just some of the stats that followed the video including over 60 million views online, a number that Awbery was not aware of.

Additionally, the song “Shallow” reentered the Top 40 on iTunes thanks to the video. And her Instagram following has grown from 4,000 to over 480,000 in just a few days.

By the way, one of those new followers was Ariana Grande. “I followed her back,” Awbery quickly assured Ellen.

Awbery is disarmingly charming as she is still taking in what it means to have all this attention after being a working singer for fifteen years.

With Freshwater sitting in the audience, Ellen also confirms that the video was not a ‘set-up’ as some have posited.

Of course, it wouldn’t be ELLEN if there wasn’t some gift-giving involved. So, to make sure Awbery gets to her gigs all across London, the show gave her a year-long pass on the London tubes, and Shutterfly gave the songbird $10,000 British pounds.

As her Instagram following has grown exponentially since the video’s release, folks are now discovering past videos by Awbery. Check out her unfiltered take on the Judy Garland classic, “Somewhere Over the Rainbow” below. #gorgeous