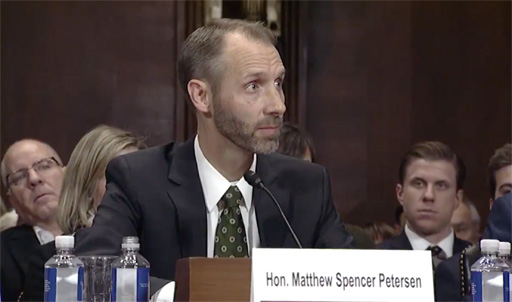 Much has been made in the past few days about judicial nominations coming out of the Trump White House of candidates who are not qualified to become federal judges.

Mateer, who was nominated to be a judge on the U.S. District Court for the Eastern District of Texas, has called transgender children part of “Satan’s plan,” supported so-called conversion therapy, and said marriage equality will lead to polygamy, bestiality, and people marrying inanimate objects. He made the comments in speeches in 2015, and they were uncovered by a CNN investigation this fall. He is currently Texas’s first assistant attorney general, and he previously worked for First Liberty Institute, a right-wing legal group. He had yet to be considered by the Judiciary Committee.

Talley was nominated to the U.S. District Court for the Middle District of Alabama. He is a Justice Department lawyer who has never tried a case — he is better known as a writer of horror novels and a ghost-hunter — and he was rated “not qualified” by the American Bar Association. Despite this, he was approved by the Judiciary Committee.

What has now killed his nomination, though, is the revelation that he once made an online comment defending the early Ku Klux Klan, founded shortly after the Civil War to carry out a violent campaign to keep newly freed African-Americans from exercising their rights. He has made other incendiary remarks as well, such as saying after the Sandy Hook Elementary School massacre that the U.S. needed “to stop being a nation of pansies and man up,” according to HuffPost.

And then, yesterday, Republican Sen. John Kennedy asked Matthew Spencer Petersen, who is nominated to be a US District Judge, basic questions of law. Questions he has no answer for.

To be absolutely honest, I don’t post this with any sense of glee or “gotcha.”

This is achingly painful to watch a man who obviously does not have the background or experience to be a judge at this time and his answers make that clear.

He should not have been nominated by Donald Trump. This is embarrassing for not only Trump but Mr. Petersen as well.

Why is the White House nominating people who have not ever argued a single motion in a courtroom for a lifetime appointment to the federal court bench?

MUST WATCH: Republican @SenJohnKennedy asks one of @realDonaldTrump’s US District Judge nominees basic questions of law & he can’t answer a single one. Hoo-boy. pic.twitter.com/fphQx2o1rc