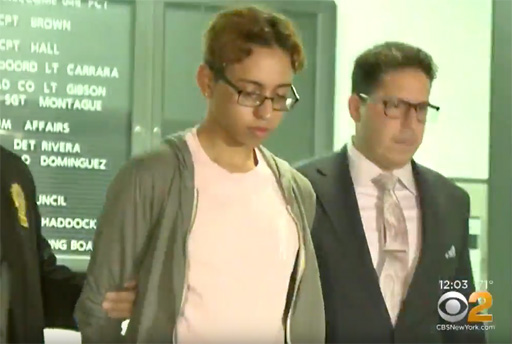 GayCityNews is reporting a video has surfaced capturing the vicious attack on gay student Abel Cedeno by classmate Matthew McCree on September 27, 2017 in a Bronx high school.

The event ended with Cedeno defending himself with a knife fatally wounding McCree.

McCree, in a white T-shirt, can be seen charging across the classroom and pummeling Cedeno, in a pink shirt, with his fists, and Laboy joining in the fray, as well, while students are screaming in horror. As the nine-second video concludes, McCree is still standing and an adult in a red shirt has pulled Cedeno away.

Attorneys for Cedeno, Christopher R. Lynn and Robert J. Feldman, are calling for the manslaughter charges against Cedeno to be dropped in light of this evidence, which backs up what Cedeno told the grand jury as well as what student witnesses told the police.

Cedeno has testified and told Gay City News that he acted in self-defense and thought he was going to die when McCree rushed him since he believed him to be a member of the YGZ 800 gang member who could have had a weapon.

Lynn said, “It is clear to me that McCree is throwing these punches with his right and his left furiously at Abel Cedeno, who is obviously terrified and putting up both his hands in defense of McCree.”

He said that the autopsy report on McCree found that his hands “show he was involved in hitting someone and that whoever he was hitting defended himself. He was punching Abel, and Abel was punching back and he used the knife once.”

The video appears to back up several students accounts of the attack.

Abel told police it was only after years of bullying that he decided to carry a knife to school out of protection.

I previously reported on the attack here.

As one person on the internet noted, had it been a gun you would have heard claims of “stand your ground” which allowed George Zimmerman to walk free after fatally shooting teenager Trayvon Martin.