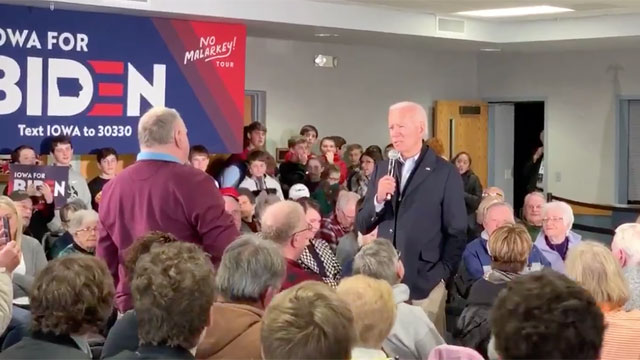 When a senior voter in Iowa stood up and told former Vice President Joe Biden he was too old to be president and followed that by accusing him of selling access to the presidency.

Joe was not having it: “You’re a damn liar.”

Former vice president Joe Biden got into a heated exchange with a man in Iowa on Thursday, in which he challenged the man to an IQ test or push-up contest after the man questioned Biden about his son and said he was too old to be president.

During a question-and-answer portion of the event in New Hampton, Iowa, the man asked Biden a question about having “sent” his son to work for Ukrainian oil company Burisma. And he said that Biden is “too old” to serve as president. “You’re a damn liar,” Biden responded.

“Look, the reason I’m running is because I’ve been around a long time and I know more than most people know and I can get things done. That’s why I’m running. And you want to check my shape, man, let’s do push-ups together here, man, let’s run, let’s do whatever you want to do, let’s take an IQ test,” Biden said.

WATCH: A tense exchange with a voter at ⁦@JoeBiden⁩’s event in New Hampton, IA this morning, where a voter started out by telling Biden he had two problems with him: he was too old, and his son’s work in Ukraine pic.twitter.com/ok7m0ShFPd