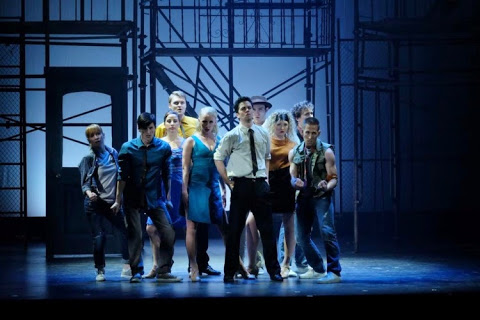 San Diego Musical Theatre, where I just finished choreographing West Side Story, has posted some video highlights from the production’s opening night. So glad to showcase this fantastic cast to The Randy Report 🙂

What I haven’t shared with anyone (but my hubby, Michael) in terms of this recent adventure in choreography was my fear of possible failure. When I was first approached about the gig, I wondered – could I bring new choreography to this legendary show?  Who am I to think I can “re-think” Jerome Robbins?

Yes, choreographers can be just as insecure as actors and other artists. I think it makes our art just as human as the actors and dancers. “Can I do this?” “Will I fail?” “What if nothing comes?” All of that ran through my head.

The producers wanted new choreography with a few “iconic moments” in homage to the original Jerome Robbins choreography in the mix. I have such a high regard for Robbins’ work that initially I was concerned. I wanted my art to land. To resonate. To be worthy.

After having my short but human moment, I faced the “mountain” and began climbing. As my long-time collaborator Kat Murphy likes to quote from Martha Graham:

“There is a vitality, a life force, an energy, a quickening that is translated through you into action, and because there is only one of you in all of time, this expression is unique. And if you block it, it will never exist through any other medium and it will be lost. The world will not have it. It is not your business to determine how good it is nor how valuable nor how it compares with other expressions. It is your business to keep it yours clearly and directly, to keep the channel open.”

My expression would be unique. One foot in front of the other, the collaboration with cast and creative team led to this “new” version of West Side Story. In my ear I kept hearing my friend, Tony Award-winner Jerry Mitchell, who always says, “Tell the story.” I kept repeating that as a mantra in my head over and over.

I studied not only Jerome Robbins’ vast body of work on the Broadway stage, but also his mentors – like Jack Cole. Getting down to basics, I revisited where all this “jazz dance” came from. Turns out I could throw in some “Fosse” here and there, because it all kind of twists and turns from the same vein.

Also, I looked to the 10-time Academy Award winning film of the musical for hints to the muscular, athletic, realistic style Robbins brought to the piece. Not for steps themselves, but for the style; the approach.

Folks love to say “this is the ‘original’ original staging.” It’s honestly very hard to determine “original” when it comes to stage versions of West Side Story since there’s no real documentation of what Robbins did in the very beginning. And listening to my friends who worked with him, the piece was never a stagnant thing to him. It continued to live, breathe and develop every time he touched it.

The most recent revivals, Robbins didn’t ‘touch.’ However, he did co-direct the film so I felt that was a solid source of what his intentions for the piece were.

Opening night in San Diego thrilling, to say the least. I knew I was in good company with James Vasquez in the director’s chair, and award-winning musical director Don LeMaster handling conductor duties. But would/could the dances I came up with work?

Some critics have already weighed in with kind words about the result:

“A visually rich show that boasts moments of stunning choreography by Randy Slovacek. There are moments when the show ignites with passion and panache. Among them: the dazzling and expertly staged “Dance at the Gym”… – San Diego Union-Tribune

“A new, knockout production by San Diego Musical Theatre, it still looks and feels fresh and relevant, with its “Romeo and Juliet”-based love story set amid the tough street gangs of New York. One of the amazing things about the show has always been the stunning, muscular dancing. Choreographer Randy Slovacek pays homage to the iconic Jerome Robbins original… It’s a wonderful mix, performed by a whopping, mega-talented cast of 31.” – Times of San Diego

“The strength of this production is the glorious dance with snappy fingers and syncopation, which follows history. In SDMT’s production, choreographer Randy Slovacek stays true to the grounded dancing that involves sexy sock hops and switchblades. Imagine a step ball change, palm to the belly, add a quick twitch and lots of anger and you’re off.” – San Diego Story

I previously posted “behind the scenes” pics from the rehearsal process here.

For all those readers who were interested, check it out below. 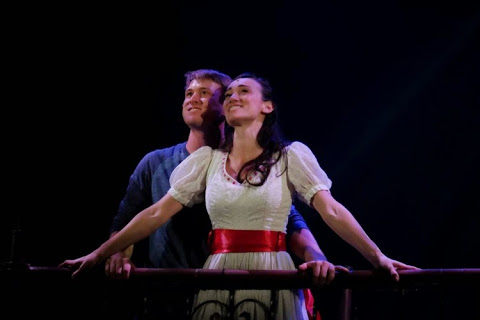