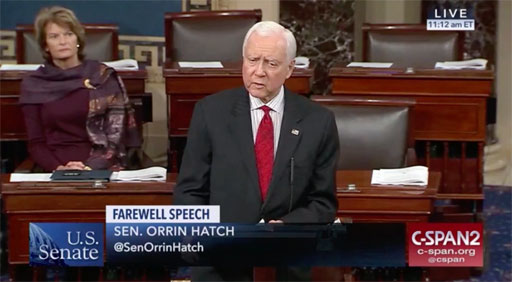 The Republican Party has never been a great friend to the LGBTQ community.

Too many conservative, Evangelical votes to court made us less than a priority in their eyes.

But as Congress prepares to recess for the holiday, Republican Sen. Orrin Hatch, in his farewell address on the floor of the Senate, surprised many by telling his colleagues they should “protect LGBTQ individuals from invidious discrimination.”

Here’s just part of what the conservative Christian and Mormon said on Wednesday via the Washington Post:

“Nowhere is the pluralist approach more needed than in the fraught relationship between religious liberty and LGBTQ rights. . . . Religious liberty is a fundamental freedom. It deserve the very highest protection our country can provide. At the same time, it’s also important to account of other interests as well — especially those of our LGBTQ brothers and sisters. Pluralism shows us a better way. It shows us that protecting religious liberty and preserving the rights of LGBTQ individuals are not mutually exclusive. I believe we can find substantial common ground on these issues that will enable us to both safeguard the ability of religious individuals to live their faith and protect LGBTQ individuals from invidious discrimination.”

Referencing the passage of the “Utah Compromise,” an anti-discrimination law that passed with bipartisan support in Utah in 2015, the 81-year-old shared how the legislation strengthened religious freedom and protected LGBT Americans from discrimination.

Hatch said that passing similar legislation on a federal level could be a unifying piece of legislation that honors the diversity of Americans.

While it’s nice that Sen. Hatch raises his voice in support for LGBTQ inclusion as he walks out the door, pardon me if I find it a bit of “too little, too late.”

As The Washington Post points out, no group is less supportive of same-sex marriage and the advancement of LGBT rights than white evangelicals.

And the Republican Party has been home to white evangelicals since the election of President Ronald Reagan.

And, it was white evangelicals, white Catholics and white Protestant Christians who flocked to Donald Trump in 2016. The same Donald Trump who hasn’t paused in his attacks on our community since taking office.

And then there’s Hatch’s own record on LGBTQ issues:

• Voted NO on adding sexual orientation to definition of hate crimes

• Voted NO on prohibiting job discrimination by sexual orientation

So, while I appreciate the sentiment, Mr. Hatch, thanks for not a lot.