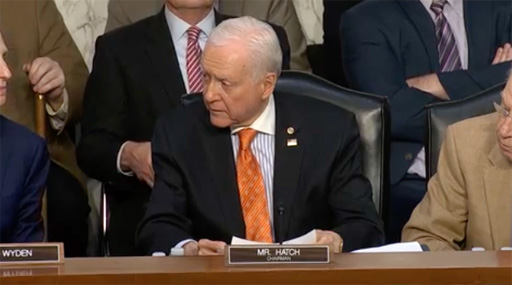 Having held his seat in the U.S. Senate since 1977, Sen. Orrin Hatch of Utah is the longest-serving Senate Republican.

But today, Hatch announced he will retire at the end of the year after four decades in office.

The veteran senator made his announcement via video today. “When the president visited Utah last month, he said I was a fighter. I’ve always been a fighter. I was an amateur boxer in my youth, and I brought that fighting spirit with me to Washington,” he said. “But every good fighter knows when to hang up the gloves. And for me, that time is soon approaching.”

This will come as a blow to Donald Trump who has encouraged the Utah senator and solid Trump-supporter to run for re-election.

The move opens the door for former Massachusetts governor and 2012 Republican presidential nominee Mitt Romney to run for the open seat in solid red Utah. Romney is now a resident of the heavily Mormon state.

Romney has indicated for months he would be interested in running but only if Hatch were to choose to step aside.

You may recall that during the 2016 presidential campaign, Romney repeatedly called Trump “a fraud,” with the Trumpster returning fire saying that Romney had “choked like a dog” in the 2012 election.

As Orrin Hatch announces his retirement and Mitt Romney emerges as the favorite to take the Senate seat, let’s all celebrate the fact that @MittRomney once said this:

“Donald Trump is a fraud. His promises are as worthless as a degree from Trump University”#UTSen

Several folks say they are waiting for Romney to be told, as a past presidential candidate like Hillary Clinton, to “take up knitting.”

Mitt Romney lost and the media is begging him to run for office. Hillary Clinton won the popular vote and they told her to take up knitting. Sexism at work.— Kaivan Shroff (@KaivanShroff) January 2, 2018

Me waiting for politicians, pundits and mainstream media to tell @MittRomney that he should fade into obscurity, never speak about politics again, not run for Senate and just take up knitting #OnlyHappensToHillary pic.twitter.com/70oajqTyfH