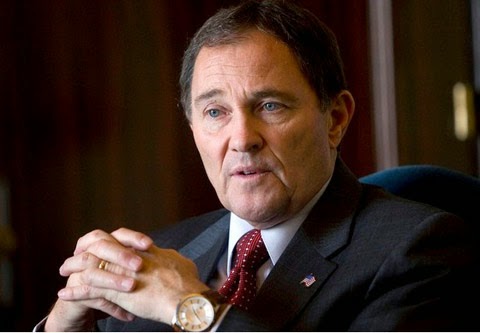 Perhaps feeling some pressure and wanting to assure his conservative constituents, Utah Gov. Gary Herbert took a veiled shot at Pennsylvania and Oregon’s governors for not appealing those states marriage equality rulings:

Herbert made the comments Thursday during his monthly televised news conference on KUED. The Republican governor said he’s dismayed by the suggestion that Utah should drop its defense of the 2004 voter-approved ban because public opinion and social mores are shifting.

He said seeing Oregon and Pennsylvania leaders this week decide not to appeal rulings from federal judges striking down bans there does nothing to change his thinking. He said those leaders should be “called on the carpet” for their decision.

“For elected officials, governors or attorney generals, to pick and choose what laws (they) will enforce I think is a tragedy, and is the next step to anarchy,” Herbert said. “We have an obligation as a state to defend those laws.”

Herbert, who I’m guessing is heterosexual, also had to trot out the “choice” claim on homosexuality: “What you choose to do with your sexual orientation is different in my mind than what you’re born with as far as your race. What your attraction may be is something else, but how you act upon those impulses is a choice.”

I love when straight men become experts on homosexuality and how the wires in LGBT brains work.