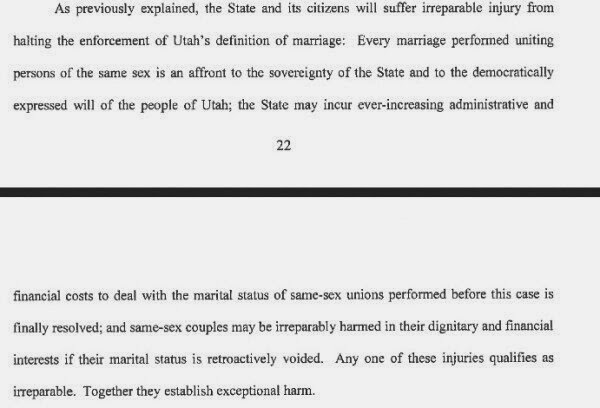 Here’s the request to SCOTUS to stay marriage equality in Utah via the Associated Press:

In papers filed Tuesday with Justice Sonia Sotomayor, the state asked her to overturn court decisions to let the marriages go forward.

Sotomayor handles emergency requests from Utah and other Rocky Mountain states. She can act by herself or get the rest of the court involved.

Nearly two-thirds of Utah’s 2.8 million residents are members of The Church of Jesus Christ of Latter-day Saints, and Mormons dominate the state’s legal and political circles.

U.S. District Judge Robert Shelby’s decision on Dec. 20 came as a shock to many in the state, which approved the ban on same-sex marriage in 2004.

Since the judge’s decision, more than 900 gay couples in Utah have gotten marriage licenses.

Shelby and the 10th U.S. Circuit Court of Appeals have already refused to halt weddings while the state appeals.

And ironically, in some twisted logic, the filing claims that same-sex couples will be irreparably harmed in their dignitary and financial interests if their marital status is retroactively voided.”

The full court filing can be read here.