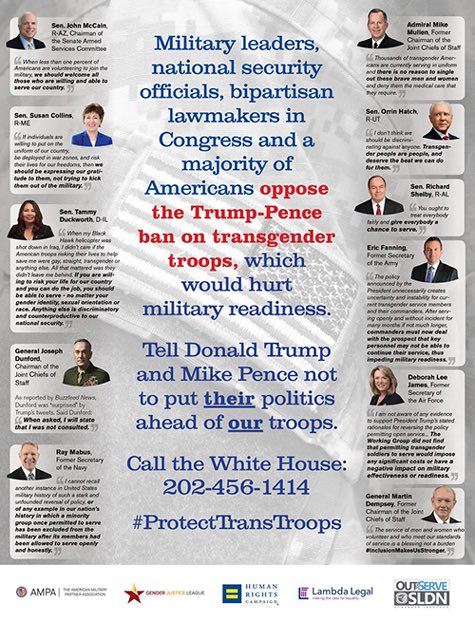 Today, the Human Rights Campaign, Lambda Legal, OutServe-SLDN, American Military Partner Association, and Gender Justice League published a full-page USA Today ad featuring leading military, national security and bipartisan officials who agree with the majority of Americans that the Trump-Pence Administration’s ban on transgender troops is wrong and hurts military readiness. The ad encourages the vast majority of Americans who oppose the Trump-Pence Administration’s effort to ban up to 15,000 active duty transgender troops to call the White House and demand they put our military readiness and brave servicemembers ahead of politics.

The advertisement reads, “Military leaders, national security officials, bipartisan lawmakers in Congress and a majority of Americans oppose the Trump-Pence ban on transgender troops, which would hurt military readiness. Tell Donald Trump and Mike Pence not to put their politics ahead of our troops. Call the White House: 202-456-1414.”

As I reported over the weekend, Defense Secretary James Mattis delivered his recommendations on transgender soldiers in the military to Donald Trump on Friday evening. Political insiders say Mattis is expected to support allowing trans soldiers to continue serving in the U.S. armed forces.

One more time – Call the White House at 202-456-1414 and leave a message saying you agree with the majority of Americans that transgender soldiers who are willing and able to serve the country they love should have that right.